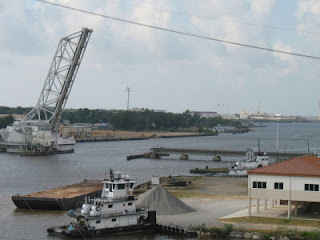 By the title, you might be expecting something about the USO in Pascagoula, as in the 'United Service Organizations.' While that might be interesting in its own right, in this case 'USO' actually stands for 'Unidentified Submerged Object.'

On the night of November 6, 1973, just off the coast of Pascagoula between the ship channel and Round Island, a group of local fishermen, including brothers Rayme and Raymond Ryan, their sons, and several others, were out fishing under a clear, moonless sky. While anchored in shallow water, Rayme Ryan spotted an unknown object in the water which appeared to be about five feet in diameter and emitting an odd amber light. The fisherman tried to poke the object with an oar, but when he did, the light would dim and the object would move a few feet away and stop. At that point, the light would brighten again. Calling his fellow fishermen over, Rayme tried the same approah for about thirty minutes with the same result. Finally, he swung violently with the oar, and it disappeared. Moving to another spot about a half mile away, the fishermen finally made a catch (no one had been able to catch anything that night). Moving back to the first area to mark the site with a buoy, Rayme Ryan discovered that the strange object had returned and was sitting motionless beneath the surface. Concerned, two of the fishermen went to the local coast guard station at 9:30 pm. The coast guard later reported that the two men "appeared sober and extremely concerned about the object." Boatswain Mates Nations and Crews were sent to investigate, arriving in just a few minutes.
The coast guard personnel immediately located what they reported as a bright metallic obect moving at 4-6 knots with an amber beam about 5" in diameter. They also observed, as the fisherman had, that the object went dark, changed course, and then re-illuminated itself. Both Nations and Crews stated they had "never seen anything like it." Then the object vanished. Returning in the daylight, coast guard personnel were unable to find anything else unusual.

Following up on the incident, the U.S. Navy, apparently concerned with the proximity of the  Navy's nuclear shipbuilding activity in the area, dispatched Lt. Commander Craig Dorman, a Navy SEAL, and another officer from the Naval Research and Development Laboratory in Panama City, Florida, to investigate on November 9. Based on their interviews of the civilian and military witnesses, the Navy concluded that (a) at least nine people saw an undetermined light source; (b) the light source was inconsistent with known marine life or with any uncontrolled man-made object; and (c) the object's presence seem to influence the number of fish caught in the area.

The incident with the underwater object was not the first or most famous event that year in Pascagoula. Just a month before, on October 11, shipyard workers Charles Hickson and Calvin Parker were also fishing in the Pascagoula River when three humanoid entities (as illustrated, left) reportedly abducted them and took them into an egg-shaped spaceship where they were scanned by a huge glass eye and then released. While the UFO abduction story received worldwide attention and has been the subject of numerous books and articles, the USO incident hardly made any waves (pun intended), athough a few regional newspapers reported the event. Unlike the UFO abduction incident, however, the Coast Guard and Navy appeared to pay attention and conducted a serious investigation. The nature of the mysterious underwater object and the source of the light remains unexplained.