The General With Two Memorials 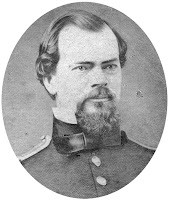 James Birdseye McPherson* was born near Clyde, Ohio, in 1828. Raised in an extremely poor family, McPherson's father, a blacksmith, had a history of mental illness and was suddenly unable to work when James was thirteen years old. To help his family, he went to work in a store owned by Robert Smith. Impressed with the young man, Smith helped obtain an appointment for McPherson to West Point. After studying at nearby Norwalk Academy for two years, McPherson entered West Point, where he graduated first in his class in 1853. Appointed to the Corps of Engineers, McPherson worked on several projects, including the construction of defenses on Alcatraz Island in San Francisco (long before it was a prison). There, he met Emily Hoffman of Baltimore, Maryland. They soon fell in love and were engaged to be married.

When the Civil War erupted, McPherson decided to cast his lot with the Union. "My mind is made up, " he wrote to his mother back in Ohio "and I see that I have but one duty to perform and that is to stand by the Union and support the general government." Unfortunately, this did not sit well with his fiancé's mother, who was a Southern sympathizer and whose only son had joined the Confederate cause. As a result, she refused to allow her daughter to marry a Yankee officer. With war afoot and facing a determined Mrs. Hoffman, James and Emily decided to postpone their wedding.

McPherson's experiences are well-documented and does not bear repeating here, other than to say he was well-liked by Grant, Sherman and other officers and advanced rapidly in the army. McPherson served a good bit of time in Mississippi, commanding the Union forces at the battle of Raymond on May 12, 1863, and one of Grant's corps during the Vicksburg Campaign. Although he did not always perform well when given independent command, he continued to advance in rank and was given army command during the Atlanta Campaign. He also made some headway with Mrs. Hoffman, who reluctantly decided that Emily could be married during McPherson's next furlough. 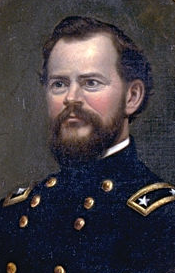 The image to the right is of McPherson in 1864. The painting was done in Huntsville, where McPherson sat for the portrait just a couple of months before his death.

Unfortunately, the furlough did not arrive soon enough. On July 22, 1864, McPherson was killed outside Atlanta by Confederate skirmishers. Upon hearing the news of his death, Confederate General John Bell Hood, who was a West Point classmate of McPherson, wrote that "the death of my classmate and boyhood friend...caused me sincere sorrow." McPherson was just thirty-five years old. When the telegram arrived at the Hoffman home announcing his death, Mrs. Hoffman read the note and proclaimed loudly that at last there was "some good news." Needless to say, the news was not taken as "good" by Emily, who locked herself in her room and did not emerge for a year. Taking nourishment in her darkened room, only her sister Dora was allowed in. Due to the darkness, Dora's eyesight was damaged trying to read to her grieving sister. Emily Hoffman never married, and mourned the loss of her soldier fiancé for the rest of her life. The story does not end there, however.

McPherson's body was taken by train to his boyhood home in Clyde, Ohio, where the citizens embraced their fallen hero, burying him in the town cemetery across from the McPherson family home. Wishing to properly memorialize McPherson, the townspeople decided to raise funds for a monument, and worked for more than a decade to achieve their goal. Then, in the spring of 1876, a delegation from Washington, D.C. arrived unannounced to remove McPherson's body for reburial in Washington. To this affront, the town exploded in anger and formed a committee of citizens to guard the cemetery. "Our people did not take kindly to the idea of having our dead hero removed," recalled a town councilman. The gentlemen returned to Washington empty-handed. 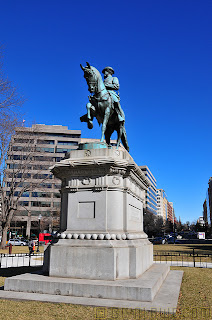 As it turns out, Emily Hoffman was behind the plot to take McPherson's remains to Washington (and closer to Baltimore), where she planned to bury him underneath a suitably large monument. Calling on both Grant and Sherman, as well as a brother-in-law (one of the founders of Wells Fargo), Hoffman managed to raise the necessary funds for an equestrian statue and even managed to convince Congress to pay for the base of the monument. Grant had convinced McPherson's mother to allow her son to be reinterred in Washington. Despite her agreement to the plan, the people of Clyde were determined, at gunpoint if necessary, to prevent it. And so, James McPherson remained in Clyde, Ohio.

In the fall of 1876, thousands of veterans, including Grant and Sherman, gathered in Washington to unveil a large memorial statue (above) of McPherson (minus the body), located just blocks from the White House. Six years later, on July 22, 1881, the townspeople in Clyde finally erected their own monument, with help from outside contributors (below). Both monuments were designed by sculptor Louis Rebisso, an Italian immigrant, and were based on items related to McPherson's life provided by his former comrades, including Andrew Hickenlooper, who loaned McPherson's dress sword to Rebisso as a model for the Washington statue. Approximately 20,000 people, including President Rutherford B. Hayes, made the journey to Clyde to once again pay homage to McPherson - this time with the body present. Unveiling the new bronze statue, erected seventeen years after McPherson's death, was his old comrade U.S. Grant. According the program for the event (above, right), the two musical pieces selected were both about Sherman, who gave the address. One of the songs, "Marching Through Georgia," was one that Sherman absolutely hated, and Grant was tone-deaf and had no appreciation for music whatsoever. After the ceremony, McPherson could rest in peace. As for Grant and Sherman, they were probably just happy to have the music stop. 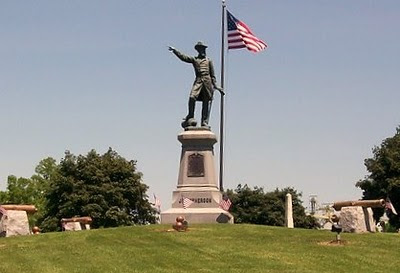 * McPherson's middle and last names are pronounced "bird-zee" and "mac-fur-son." A simple way to remember the pronunciation of his last name is that "there is no fear in McPherson."