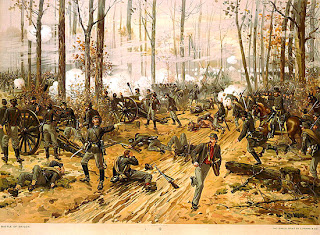 Still in the mode of recognizing the sesquicentennial anniversary of the battle of Shiloh, today's entry highlights an artist whose works are among the most recognizable pieces of Civil War-themed art, among them the famous painting of the “Hornet’s Nest” at Shiloh. Bror Thure de Thulstrup (whose name is almost unpronounceable – at least to me) was born on April 5, 1848, a native of Stockholm, Sweden. As the son of Sweden's Secretary of the Navy, Thulstrup grew up in family rich in military tradition, and after graduating from the Royal Swedish Military Academy, he joined the Swedish military as an artillery officer in 1860, at age 20. Thulstrup soon left Sweden for Paris, however, where he joined the French Foreign Legion and served in the Franco-Prussian War. He also saw service in north Africa with the Legion’s First Zouave Regiment. 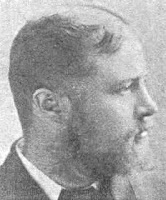 After completing his time in the French army, Thure de Thulstrup (left) went to Canada to become a civil engineer. Apparently unsuccessful in that endeavor, he emigrated to the United States the next year (in 1873) and became an artist for the New York Daily Graphic and Frank Leslie's Illustrated Newspaper. As his reputation as an artist gained steam, he found job openings with other prestigious publications, including Century, Harper's Weekly, and Scribner's. At Harper’s Weekly, Thulstrup worked alongside cartoonist Thomas Nast for almost twenty years (who is credited with creating the modern image of Santa Claus). As Nast’s protégé, Thulstrup landed a commission with the Louis Prang Company of Boston to produce a series of Civil War-themed prints in the 1880s, just as veterans began to memorialize the battlefields. Prang's goal was to reproduce them "for the enjoyment of the masses and the spread of art-education as well as art-appreciation." And, of course, to make money. 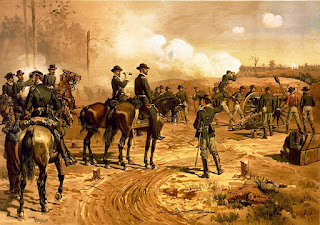 Interestingly, many of the battle scenes in the series are not of action in the front lines, as with most other Civil War art of the period. Instead, Thulstrup seemed to focus more attention on action in the rear, often featuring a recognizable general officer in the scene and focusing particularly on artillery batteries. A good example is the image reproduced here of the battle of Atlanta, which includes William T. Sherman observing the action from the rear (in actuality, Sherman was not even that close to the action). The fact that Thulstrup was an artillery officer in Sweden no doubt influenced him greatly, and it makes sense that he was painting what he knew best. Even when the image was of front line action, it was often from the rear, as seen in the Antietam painting (below). And, of course, images of famous generals help sell more prints. Perhaps his most famous is that of Philip Sheridan at the battle of Cedar Creek (bottom of page). For his work, the L. Prang  Co. Prang paid him several hundred dollars each, the Shiloh print netting him $400. While Thure de Thulstrup certainly painted many other scenes, his Civil War series was called “some of the most familiar scenes of American life now extant” by the New York Times in his obituary. 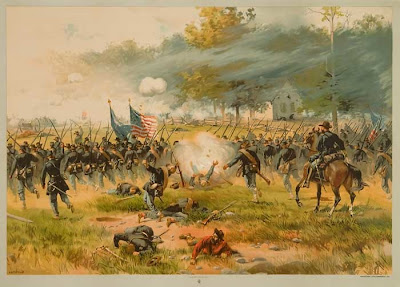 Thulstrup died in 1930 in New York and is buried at Green-Wood Cemetery in Brooklyn. He and his wife Lucie Bavoillot had no children and he left no personal papers behind. However, his Civil War scenes live on in the hearts of millions of Americans. 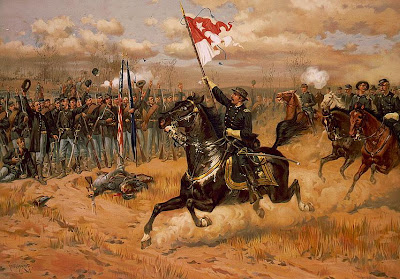