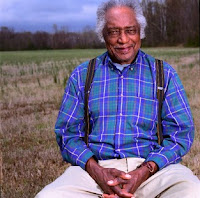 He was born Robert Lee Burnside on November 23, 1926, at Harmontown in Lafayette County, near Oxford, Mississippi. R.L. Burnside was an blues singer, songwriter, and guitarist who spent most of his life in north Mississippi, working as a sharecropper and playing guitar in juke joints and bars. In the 1940s, Burnside headed to Chicago to seek a better life. There, he dabbled in music and was acquainted with Muddy Waters, another Mississippi transplant and one of the first blues musicians to use an electric guitar. Burmside  married Alice Mae Taylor in 1949, with whom he would have twelve children (eight sons and four daughters). Life in Chicago changed, however, when Burnside's father, uncle, and two brothers were killed in the span of a year. In fact, his brothers were murdered on the same day. To escape the violence, he left Chicago and went back to Mississippi, where he drove a farm tractor during the day and played in juke joints at night near his home in Holly Springs. 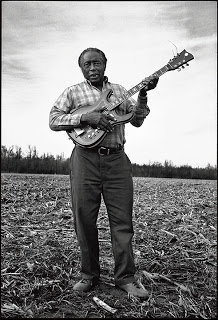 He could not escape the violence, however. During a dice game, Burnside killed a man, was convicted of murder and sentenced to a six months' prison sentence at Parchman. At the time, it was reported that Burnside's boss pulled some strings to keep the sentence short because he needed Burnside's skills as a tractor driver. Burnside later said "I didn't mean to kill nobody...I just meant to shoot the son-of-a-bitch in the head. Him dying was between him and the Lord."

Although he played music for most of his life, R.L. Burnside did not receive national attention until the early 1990's when a documentary film based on author Robert Palmer's book "Deep Blues" featured him as one of the film's highlights. Subsequently, Palmer produced Burnside's "Too Bad Jim" for the fledgling Oxford, Mississippi, label "Fat Possum Records." In the latter half of the 1990s, Burnside repeatedly recorded with Jon Spencer, garnering crossover appeal and introducing his music to a new fan base. One of his songs, "It's Bad You Know," was included in the HBO series "The Sopranos" and is on the show's soundtrack album that sold over 400,000 copies. 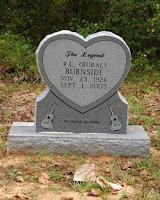 One commentator noted that R.L. Burnside, along with Big Jack Johnson, Paul "Wine" Jones, Roosevelt "Booba" Barnes and James "Super Chikan" Johnson, were "present-day exponents of an edgier, electrified version of the raw, uncut Delta blues sound." Burnside died in Memphis in 2005 and is buried at the Free Springs CME Church cemetery in Harmontown.

- Thanks to John Cofield of Oxford, Mississippi, for today's guest column.