The other day, one of those seemingly endless 'dancing' shows was on the television. For some reason, I said 'Heavens to Murgatroyd!' about something or another and then asked 'I wonder where that saying comes from?' Almost instantaneously, the television announcer introduced a dancer by the name of 'Murgatroyd!' I couldn't believe it. I had never really thought about anyone actually being named Murgatroyd, so I decided to find out what this strange saying means, if anything. Here's what I discovered.

The phrase "Heavens to Murgatroyd' was a favorite saying of 'Snagglepuss,' the sometimes pink, sometimes purple cartoon lion featured on the Yogi Bear Show in the 1960s. Another one of his catch phrases was 'Exit, Stage Left!' "Snagglepuss's voice, performed by Daws Butler, was based on actor Bert Lahr, who played the cowardly lion in The Wizard of Oz (left). Butler was very adept at imitating Lahr, so much so that when 'Snagglepuss' became a spokesman for Kellogg, Lahr sued. The suit was settled when Kellogg agreed to prominently credit Butler so it would not appear that Lahr was promoting the cereal. Interesting, but it doesn't solve the question of where 'Heavens to Mergatroyd' came from.

As it turns out, the first time the phrase was used was not by Snagglepuss but was from the 1944 film Meet the People, starring Lucille Ball. Made during WWII, the film was shown overseas to the troops before being released in the U.S. In the movie, the character called "the commander" uses the phrase 'Heavens to Mergatroyd,' and the actor who played the part was (you guessed it) Bert Lahr. OK, but where did the writers come up "Mergatroyd" in the first place?

Meet the People was a musical directed by Sig Herzig and Fred Saidy. No doubt, as any director of a musical would be, Herzig and Saidy were influenced by Gilbert and Sullivan. In their 1887 comic opera Ruddigore, Sir Rupert Murgatroyd, the first Baronet of Ruddigore, persecuted witches and one of his victims, as she was burned at the stake, cursed all future Murgatroyd Baronets to commit a crime every day or die in agony. So, every baronet since had died in agony once he could no longer continue a life of crime. In the opera, no less than ten of the characters were named Murgatroyd, most of them ghosts. But where did Gilbert and Sullivan get the name? 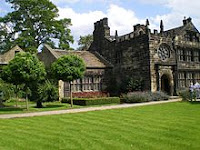 Well, it is old English name, originating in Yorkshire, and East Riddlesden Hall (right), a restored 1642 manor house now owned by the National Trust in Britain, was the home of a wealthy clothier named James Murgatroyd. Apparently, Gilbert stayed at the Hall numerous times and was thus very familiar with the reputation of the Murgatroyd family, known "for their profanity and debauchery." The Hall is also known for its ghosts, and has been featured on various ghost hunter shows. To close the loop, Ruddigore, the opera, was performed at East Riddlesden Hall on at least one occasion. Why and how this developed into the phrase 'Heavens to Murgatroyd' in Meet the People is a bit of a mystery, but it may be nothing more than a tip of the hat to the comic genius of Gilbert and Sullivan.

Now back to the present. The female dancer introduced on the dancing show was named Peta Murgatroyd (left), and is from New Zealand. Her dancing partner on the show is former Green Bay Packer wide receiver Donald Driver, a product of Alcorn State University near Lorman, Mississippi. I honestly do not know how good a dancer Donald Driver might be (and don't really care), but I wonder if some Snagglepuss aficionado out there might utter the phrase "Exit, Stage Left!" when and if he loses the competition.