From Mississippi to Utah: The Incredible Journey of Mary Black Brown

Along with the anniversary of the battle of Shiloh, April 6 is the anniversary of another significant event in American religious history. On April 6, 1830, Joseph Smith, Jr., and a small group of followers organized the Church of Christ, later known as the Church of Jesus Christ of Latter Day Saints, in western New York. In 1831, Smith (right) and the Saints moved to Kirtland, Ohio, where the first temple was constructed (and still stands). As opposition to the Mormons grew, the movement went further west to Missouri, where armed mobs drove them into Illinois. There, Joseph Smith and an ever-growing community of converts founded the city of Nauvoo, situated on the banks of the Mississippi River. 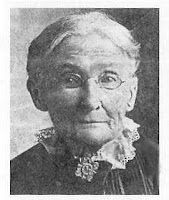 While most of the LDS converts were from the northeast, the midwest and from England, there were others from Mississippi and other southern states. One who made the trek to Nauvoo was Mary McRee Black (left, ca. 1898) of Copiah County, Mississippi. Born in 1819, Mary married George Black, also from Copiah County, and in 1841 they joined the Mormon Church. Mary's father was opposed to her conversion, and she was essentially disowned because he believed she was "being led astray by the devil." Ostracized by their families and others in Copiah County, George and Mary Black, with few possessions, left Mississippi and went to Nauvoo in 1843. 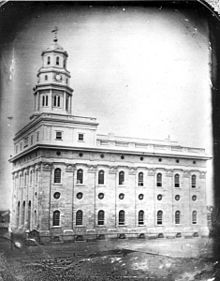 In Nauvoo, George Black worked as a tradesman building the Nauvoo Temple (right), and worked in the mercantile business. He and his business partner were successful until George contracted malaria and died in 1845. The business partner, a Mr. Gully, apparently swindled Mary out of her husband's part of the business, for which he was later expelled from the Church. George and Mary had five children, four girls and a boy. In addition to losing her husband, Mary buried two of her daughters as well. Now a widow and a single mother of three and in poor health herself, Mary decided to return to Mississippi, where George's parents had since converted. From her own family, however, she had heard nothing. Mary's decision to go back home was at the urging of Brigham Young, who had been selected to lead the Saints after Joseph Smith was murdered by a mob in 1844. Upon her return, she was reconciled with her father and her health recovered. However, her other two girls also died. Grief-stricken, she returned to Navoo with one surviving child, along with another group of converts from the area.

The Mormon settlement at Nauvoo would not last much longer. Threatened by increasing hostility from their non-Mormon neighbors, Brigham Young and most of the Saints moved further west, abandoning Nauvoo in 1846. The temple, never fully completed, later burned. A new temple on the same site has been constructed in recent years by the LDS Church. Migrating west with the other Saints, Mary and George Black, Jr., her only surviving child, made it to Council Bluffs, Iowa. Here, she married Captain James Brown (left), who had earlier been encouraged by church leaders to marry the young widow. At Council Bluffs, Mary, along with her new husband and her son, joined the Mormon Battalion, a unit of approximately 550 men enlisted in the U.S. Army for service in the Mexican War.

With regular army regimental staff, including the likes of future Civil War generals George Stoneman and Philip St. George Cooke, the Mormon Battalion marched some 2,000 miles across the western mountains and the hostile desert in service to the U.S. government, despite repeatedly being driven west because of their beliefs. Although the only "battle" was with a herd of wild bulls in Arizona, the battalion did much to open the west for future expansion, completing their journey in San Diego, California. The Mormon Battalion is the only religious-based unit ever organized in the U.S. military. Mary Black Brown served as a laundress with the unit until arriving at Pueblo, Colorado, where she and Captain Brown led a group of sick men to Salt Lake City, arriving on July 29, 1847. At Salt Lake, she and her husband were greeted by Brigham Young himself (left).

In Utah, Mary wrote whole new chapters in an already extraordinary life. Among her accomplishments, she helped carve new settlements from the hostile wilderness in the Ogden, Utah, area, and managed to raise five more children. In her later years, she proudly attended reunions of the Mormon Battalion and was treated as one of the veterans. Mary Black Brown, after much trial and tribulation, lived to the ripe old age of 86, passing away in 1907. She is buried beside her second husband in Ogden. Her oldest son, George Black, Jr., survived her by only a few years. He died in 1912 after being injured in a wagon accident.

This flag is believed to be the flag raised by the Mormon Battalion on arrival in San Diego. The eagle in the upper left of the flag was painted over a beehive, indicating the flag had previously been used by the Nauvoo Legion, a Mormon defense force commanded by Joseph Smith.