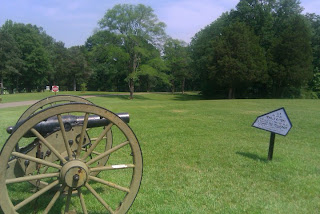 In the early, predawn hours of April 6, 1862, some 40,000 Confederate soldiers under the command of Gen. Albert Sidney Johnston surprised the Federal army encamped at and about Pittsburg Landing on the Tennessee River. The sheer force of the attack drove the unprepared Union troops from their camps and for a time it looked as if U.S. Grant's army would be pushed into the Tennessee. After a day's worth of savage fighting, though, during which Johnston himself was killed, the Federals somehow held on and were reinforced during the night. The next day, Grant counterattacked, and slowly drove the Confederate army back. The battle of Shiloh, fought 150 years ago today, saw almost 24,000 casualties, the bloodiest in American history at the time.

The battle opened in a place called Fraley Field (see below), just a non-descript clearing in the wilderness near Pittsburg Landing. Early in the morning (about 5:00 or so) - the same time I'm writing this, in fact - Hardcastle's 3rd Mississippi Battalion began skirmishing with men from the 25th Missouri, men who had been sent out on a patrol and found more than they bargained for. Pvt. Addison Glenn (lower right), a soldier in Co. H, 25th Missouri (U.S.) was among those in that early morning patrol. Groping through the predawn twilight, both sides kept up the fight for more than an hour. Aaron Bascum Hardcastle (upper right), a former U.S. army officer who had slipped out of Los Angeles and made the difficult trek across the western deserts and plains to join the Confederate cause, was commander of the 3rd Mississippi Battalion. According to Hardcastle, "The enemy opened a heavy fire on us at a distance of about 200 yards, but most of the shots passed over us. We returned the fire immediately and kept it up...We fought the enemy an hour or more without giving an inch." And the rest, as they say, is history.

Shiloh is a place like no other. To me and to many others, there is something uniquely profound about the battle. Across the woods and fields, there seems to be a ghostly presence of all those souls who were once a part of that terrible day hanging in the air, and for many Americans Shiloh means something, even if its undefined. Perhaps it's the loss of innocence, the realization that the war was not going to be quite as easy as many hoped, as if war ever is. Bruce Catton may have put it best: "It had begun with flags and cheers and the glint of brave words on the spring wind, with drumbeats setting a gay rhythm for the feet of young men who believed that war would beat clerking. That had been a year ago; now the war had come down to uninstructed murderous battle in a smoky woodland, where men who had never been shown how to fight stayed in defiance of all logical expectation and fought for two nightmarish days. And because they had done this the hope for an easy war and a cheap victory was gone forever." 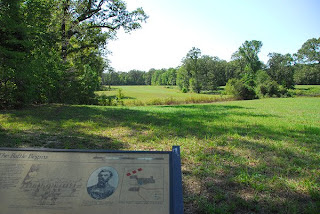 Here in the midst of a busy Holy Week, many are preparing for the festivities of Easter. Even so, I hope you will pause at some point and remember the sacrifices made on the bloody fields of Shiloh, 150 years ago today.