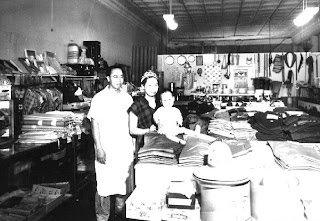 Chinese immigrants first arrived in the Mississippi Delta during the Reconstruction period. Unable to find work as laborers on plantations, many Chinese instead began operating grocery stores and other shops that catered to the plantation system. These establishments, like the Washington Market store in Boyle (left), operated by Joe Fong and Mee King, soon became a fixture in many Delta communities. As a ethnic group, the Chinese fell somewhere between white and black society. As such, Chinese people in the Mississippi Delta played a unique role in bridging racial gaps in the segregated south, while striving to maintain their own unique cultural identity. 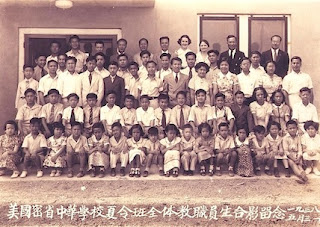 One area in which the Delta Chinese struggled to bridge the racial divide was in education. Legally considered non-white and therefore unable to attend segregated white schools, Chinese citizens were justifiably concerned with the quality of education in the segregated black schools, which were given far less funding by the state and had vastly inferior facilities. The solution for many was to form Chinese-only private (or mission) schools, often with the support of a local Baptist church. A good example is the school in Cleveland (above), which had two white teachers for the English course work and a Chinese teacher for instruction in Chinese language. Established in 1937, the school had about 60 students from across the Delta. In another ten years, Chinese students were allowed to attend white schools, and the school closed. 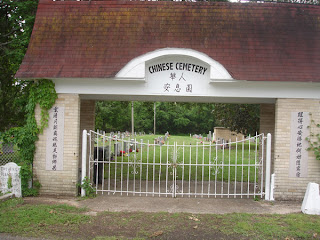 Another important aspect of Chinese cultural identity was in burial practices. Unable to bury their dead in white cemeteries, the Chinese were initially interred in black cemeteries. In time, however, due to cultural and religious differences, the Chinese in the Mississippi Delta established their own cemetery. In 1913, Wong Yen and Joe King purchased a one-acre tract from the owner of the Wells Funeral Home in Greenville as a Chinese burial ground. This cemetery was the main Chinese cemetery for much of the Mississippi Delta until 1931, at which time a larger cemetery lot was purchased in another location. While some bodies were moved to the new cemetery, there are still a number of grave markers in the old cemetery, which is well-maintained by the Chinese Cemetery Association of Greenville. Still written in Chinese characters on the gate post of the cemetery are instructions on where to locate the gate key (it was hidden behind a loose brick). The key, however, is no longer there. 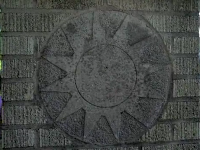 This is one of the designs on the gates
of the original Chinese cemetery.