The Life and Death of Charlie Bowdre 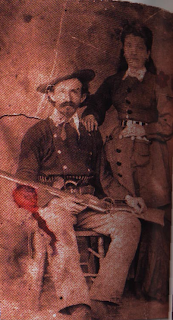 William Henry McCarty, Jr. died at the hands of a lawman in the New Mexico Territory on the night of July 14, 1881. Also known as Henry Antrim and William H. Bonney, the death of 'Billy the Kid' has become the stuff of legend. Less well known is one of "The Kid's" gang, a Mississippian by the name of Charlie Bowdre. Charles Meriwether Bowdre was born in Georgia in 1848 but moved to DeSoto County, Mississippi, with his parents at a young age. By the time he was six, Charlie had already started working on the family farm and continued to do so until 1874, when he abandoned the farm and headed west. 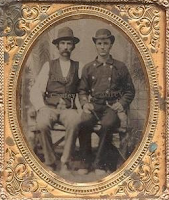 Charlie eventually arrived in Arizona, where he became friends with Doc Scurlock.  Josiah Gordon "Doc" Scurlock, about the same age as Bowdre, was a native of Alabama. After studying medicine in New Orleans, Scurlock headed to Mexico, where he got into an argument over a card game with a man and they both drew pistols. Although a bullet went through his mouth and out of the back of his neck, Scurlock fired back and killed the man. After that, Doc returned to the United States, where he eventually met Charlie Bowdre. Oddly enough, the two opened a cheese factory, where, according to some accounts, one of their first employees was William McCarty. In 1876, Doc and Charlie closed the cheese factory and moved to Lincoln County, New Mexico. That fall, Scurlock married Antonia Herrera and Charlie married Antonia's half-sister, Manuela Herrera, making Doc and Charlie brothers-in-law. In the image above, they are seen together, with Charlie on the left. In New Mexico, they worked as ranch hands and rode in several posses to catch and occasionally hang horse thieves and cattle rustlers, even though Scurlock had himself been accused of stealing cattle in another state. 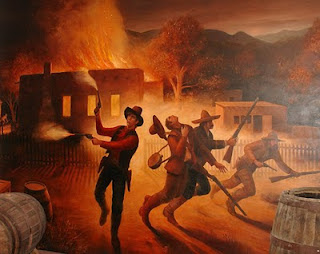 With the outbreak of the so-called Lincoln County War in 1878, which was in essence a turf battle between rival factions of cowboys, outlaws and lawmen, Bowdre and Scurlock joined the Tunstall-McSween side, which included, among others, Billy the Kid. During the "war," Charlie was present with the "Regulators" at the gunfight at Blackwater Creek on March 9, 1878, and at Blazer's Mills on April 4, 1878. It was here that both Doc and Charlie were shot by "Buckshot" Roberts. Roberts was in turn shot by Charlie Bowdre, and Roberts later died. As a result, Bowdre was charged with the murder of Roberts.

Winding up on the losing end of the Lincoln County War, Doc and Charlie moved to Fort Sumner, New Mexico, to work as ranch hands, but still participated with some of Billy the Kid's gang in rustling cattle (now appropriately named "The Rustlers"). For his part, Doc Scurlock was tired of the outlaw life and moved to Texas, where he became a teacher and a postmaster (and even wrote poetry). When he died in 1929 at age 80, he did so as a respected citizen. Charlie Bowdre, meanwhile, was also ready to quit riding with Billy the Kid (right) and decided to surrender himself and face the charges levied against him for the murder of Buckshot Roberts. However, he went on one last mission with Billy the Kid to ambush Pat Garrett, who had been appointed sheriff by Territorial Governor and former Union General Lew Wallace* to hunt down Billy the Kid.  A gun battle ensued and Tom O'Folliard, another of the gang members, was killed. Bowdre and the rest escaped alive. On December 23, 1880, the gang was holed up in a rock house (above) at Stinking Springs. Unbeknownst to them, Pat Garrett's posse had surrounded the building during the night. At dawn, Charlie came out to feed the horses and was gunned down by Garrett's men, who mistook him for Billy. Later that day, Billy the Kid and the rest of the gang surrendered. Charlie Bowdre was dead at age 32. The image at the top of the page is of Charlie and his wife Manuela, and was supposedly taken from his bullet-ridden corpse, with a bloodstain still visible.

After escaping from jail and killing the two guards in the process, William Henry McCarty was killed - some say murdered - by Sheriff Pat Garrett on July 14, 1881. He was just twenty-one years old. Billy the Kid is buried at Fort Sumner's old military cemetery beside his old outlaw friends Tom O'Folliard and Charlie Bowdre. Vandalized through the years, the grave stones are now protected by a metal cage.

In the movies Young Guns and Young Guns II, Charlie Bowdre is portrayed by actor Casey Siemaszko, whose father was a Polish resistance fighter in World War II and a survivor of the Sachsenhausen concentration camp. Interestingly, Doc Scurlock's character, played by Kiefer Sutherland, dies in the shootout at Stinking Springs, along with Charlie Bowdre. In reality, of course, Doc had already moved on to his new life in Texas. Apparently, the non-historic script change was because Kiefer Sutherland demanded it in order to be part of the big scene.

* Lew Wallace is also known as the author of the novel "Ben Hur."