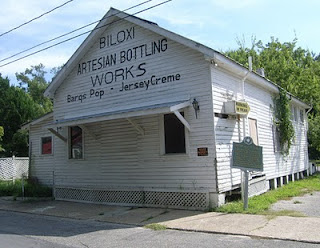 Ah, summertime in the sunny South. Lazy days, baseball, moon-pies and RC Cola, all great. But nothing quite says 'summer' like a good-old ice cream float. And what goes into a classic ice cream float (besides ice cream)? Why, Barq's of course! And the best part is that Barq's is a product with hometown Mississippi roots.

Edward Charles Edmond Barq was born in New Orleans in 1871. When he was only two years old, his father, who was French, died. After his father's death, Edward's mother returned to France, where Edward (right) learned the art of flavor chemistry. Reportedly to avoid French military service, Edward returned to New Orleans in 1890, along with his brother, Gaston. Together, they opened Barq’s Brothers Bottling Company. There, the Barqs bottled carbonated water and created soft drinks of various flavors, including a drink called 'Orangine,' which won a gold medal at the 1893 World's Fair in Chicago.

In 1897, Ed married Elodie Graugnard, and they moved to Biloxi, Mississippi (his brother died sometime prior to this). After purchasing the Biloxi Artesian Bottling Works and establishing his own bottling company in Biloxi, Barq sold his first soft drink the next year, a root beer.* Barq's root beer-flavored drink had more carbonation and less sugar than other root beers at the time, and was said to have "a bite" to it. To avoid legal issues with the Hires Root Beer Company, Barq's was not called 'root beer' for decades (Hires attempted to trademark the name 'root beer' and actually sued Barq's in the 1930s). Thus, Barq's was simply known as Barq's, and the company used the basic advertising slogan of 'Drink Barq's. It's Good." Throughout the company's existence, advertising was kept at a minimum compared to larger bottling operations like Coca-Cola and Dr. Pepper, relying on word-of-mouth campaigns to a large extent. Some advertising gimmicks (like this thermometer) were used, but nothing comparable to bigger companies.

In 1931, Barq's was the first bottler to introduce 12-ounce glass bottles instead of six and eight-ounce bottles typical for soft drinks at the time. Incredibly, the larger bottles were sold for the same price as the smaller ones (all of 5 cents). This was the brainchild of Ed Barq's son, who felt the change would give “a sense of satisfaction which comes with getting more of a good thing than the price seems to warrant.” The price remained at five cents for many years. 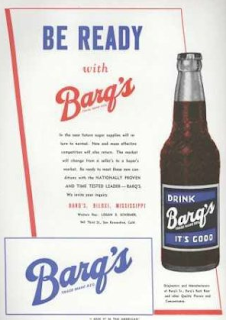 Barq's established it's first franchise in 1934 in Mobile, Alabama, followed soon thereafter by one in New Orleans. In New Orleans, the franchise was held by Jesse Robinson, who had been taken from a broken home and raised by Barq as his own son. Unlike other franchisees, Barq allowed Robinson through special contracts to make his own syrup. Thus, Barq's in New Orleans had a slightly different flavor than other Barq's distributors. Another franchise was sold to Richard S. Tuttle, Sr. of Cincinnati, Ohio, who along with two other men founded the Barq Bottling Company in that city. Tuttle had the idea of adding red dye to the Barq’s Crème Soda, creating  “red pop” soda. Seeing a good thing, Barq's in Biloxi, which distributed the concentrated syrup, also began adding the dye.

By 1937, sixty two bottling plants had been established in twenty two states, and by 1950 some 200 franchises had been established. In 1938, Barq's had to deal with a Federal government ban on caffeine in root beer. To get around the ban, Barq's, which included caffeine, simply dropped all references to 'root beer' and used 'Barq's Sr.' for a time. Meanwhile, Barq developed a caffeine-free version. In 1960, the caffeine ban was reversed and 'Barq’s Sr.' was discontinued in favor of the original Barq’s.

In 1976, John Koerner, along with an attorney, bought the company from the Barq family and moved the headquarters to New Orleans. With an aggressive growth strategy and innovative promotions, Koerner built Barq’s turned Barq's into the second most popular root beer in the U.S. He also added the words "Famous Olde Tyme Root Beer" to the product. In 1995, Koerner sold the company to Coca-Cola. On March 26, 1998, Coca-Cola officials traveled to Biloxi to celebrate the 100th anniversary of Barq's, an event I attended. 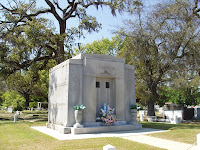 Edward Charles Edmond Barq, Sr., died in New Orleans in 1943 at age 72. He is buried in the Biloxi City Cemetery. Although the Barq family is no longer involved in the bottling business, his innovation and vision helped create a legacy in his adopted hometown, where the original Barq's bottling plant (see above) still stands.

Now, how about one of those root beer floats...

*  There is disagreement concerning the year that Barq introduced his root beer, with some who claim it was not until 1902 that he developed his root beer flavor.