Brown’s Vineyard was a popular vacation spot on the Mississippi Gulf Coast during the late 19th and early 20th centuries. Located at the southwest corner of present-day Highway 90 and Waveland Avenue, the winery was established in 1874 by Frederick W. and Anna Braun. Natives of Germany, the Brauns (later changed to “Brown”) purchased the property in 1859. Utilizing some ninety acres of land, the Browns produced their wines from scuppernong (or muscadine) grapes grown on the property. The wines and champagnes produced were marketed and sold by mail order to customers across the United States. Brown’s wines were also widely known for their "medicinal" qualities, and were believed to be “particularly nourishing for invalids.” 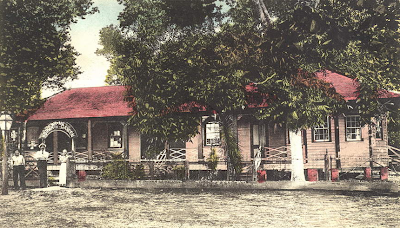 Guests who visited Brown's establishment came from hotels like the Pickwick, Tulane and Clifton in Bay St. Louis, which was approximately five miles distant. Most visitors were vacationing from New Orleans, Natchez or other towns in the region. After arriving in wagons designed to transport a party of guests at once, visitors would be served wine, along with homemade bread and butter. Inside the Brown house (left), which contained a large center hall, a professional pianist was available for dances. An 1895 account stated that the establishment was "a veritable garden of beauty" and "a great resort for the society people, who are summering along the Gulf Coast and many are the pleasant parties and dances which take place in the large hall and dancing pavilion of the house.” Out in the vineyard, the vines grew in arbors about ten feet square and eight feet high and ten feet apart, which allowed guests to walk underneath and pick grapes off the vines. 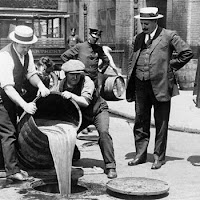 Management of the operation passed to Albert C. Brown, the son of Frederick and Anna Brown, in the early years of the 20th century. The winery prospered under his management until Federal prohibition forced the closure of the vineyard in 1920. According to various accounts, the wine cellar was emptied and the entire inventory buried on the property. Revenue agents, at some later time, reportedly returned to the site and had the remaining bottles exhumed and broken. It is believed that only one intact bottle of wine produced by Brown’s Vineyard remains today. That bottle, which has never been opened, is said to be in the possession of the Hancock County Historical Society.


Federal revenue agents destroy illegal liquor in New York in the 1920s (right). In the photo above, law enforcement officers from Gulfport pose with alcohol seized in 1909. Mississippi passed a prohibition law more than a decade before the rest of the country, and would be the last state to ratify the repeal of prohibition.