Wyatt Emory Cooper was born on September 1, 1927, in Quitman, Mississippi. Growing up in a very poor family, Wyatt moved with his parents, Emmet and Rixie Cooper, to New Orleans at a young age. In his twenties, Cooper went to New York to pursue an acting career. For a four-day run in the fall of 1953, he appeared on Broadway in the cast of The Strong Are Lonely at the Broadhurst Theatre. The music composer for the production was another native Mississippian, Lehman Engel of Jackson, whose personal papers are in a collection at Millsaps College. Still an active theater, the Broadhurst Theater's current show also has a Mississippi connection: Tennessee Williams' "A Streetcar Named Desire."

With only moderate success as an actor, Cooper moved to Los Angeles in his thirties where he worked as a screenwriter and attended both UCLA and UC-Berkeley. As an actor, Cooper appeared mostly in television cameos, but he had moderate success as a screenwriter. In 1962, he was the principal writer for "The Chapman Report," starring Shelley Winters and Jane Fonda. The film, according to a review at the time, was "unforgivably cheap and trashy" (although tame by today's standards) and the screenplay was labeled a "disaster." In 1972, reviews were a little better for "The Glass House," a film starring Alan Alda, which Cooper co-wrote with Truman Capote. While residing in West Hollywood, Cooper lived near Dorothy Parker and her husband Alan Campbell. Parker was a poet, satirist and screenwriter who would be nominated twice for an Academy Award, including for "A Star is Born" (1937). A liberal activist and later identified a member of the Communist Party, Parker would be blacklisted during the McCarthy era. Cooper developed a close friendship with Parker and Campbell. After her death in 1967, he wrote a biographical piece on Parker in Esquire magazine which garnered some attention. By that time, he had moved back to New York and worked as a magazine editor. 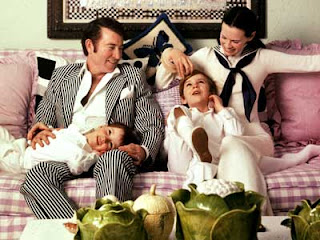 It was in New York that Wyatt Cooper finally made it big (soon after the release of "The Chapman Report"), although it wasn't due to his acting or writing skills. Instead, he married well. On Christmas Eve in 1963, Cooper married Gloria Vanderbilt, just four months after she divorced her third husband, director Sidney Lumet. Born in 1924, Vanderbilt, in addition to being an heir to the Vanderbilt fortune, is known for her line of designer blue jeans and other fashion designs. She is also an artist and writer, and has published several memoirs and novels. With Vanderbilt, Wyatt Cooper had full access to the New York social scene, and he and his wife were frequently noted in the "best dressed" lists. They had two sons, seen here in this family photo from 1972 (above). Tragically, in 1978, Wyatt Cooper died during open heart surgery. He was just 50 years old. After his death, Gloria Vanderbilt never remarried (although she has dated other men, including musician Bobby Short).

One of Gloria and Wyatt's two sons, Carter Vanderbilt Cooper, also met a tragic end. Ten years after his father's death, Carter, a graduate of Princeton, committed suicide by jumping from the family's 14th floor penthouse while his mother was present. He was 23 years old. Vanderbilt credited his death to a psychotic reaction to a prescription drug. Their other son is Anderson Cooper (left). Also a Yale graduate, Anderson Cooper is a CNN news anchor. He is named for his paternal grandmother, whose maiden name was Anderson. Interestingly, Anderson Cooper is also related (on his mother's side) to the much-despised Civil War cavalryman, Union General Judson Kilpatrick, known for being "reckless and self-aggrandizing, with penchants for womanizing, petty graft, and falsifying reports to make himself look good." 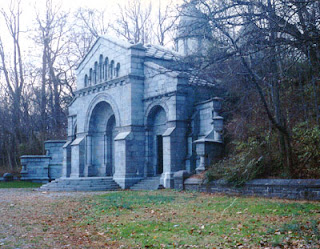 Wyatt Emory Cooper is buried in the enormous Vanderbilt Mausoleum in the Moravian Cemetery on Staten Island, along with all of the Vanderbilt clan, including George Washington Vanderbilt II, the builder of Biltmore House in Asheville, North Carolina. For a poor boy from Clarke County, Mississippi, Wyatt Cooper now rests in some of the most exclusive real estate in the country.