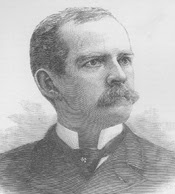 John Henry Rogers was born in 1845 in North Carolina. His father, Absolom Rogers, was a plantation owner and a slaveholder. In 1852, he moved with his parents to Mississippi, to a plantation near Madison Station. Rogers attended the local schools (perhaps at the Roudenbush Academy, which was located nearby), where he studied, among other subjects, Latin, Greek and a bit of military science. Because of this "experience," Rogers was picked as a drillmaster for a company of home guards in 1861, composed mostly of much older men. The next year, at age sixteen, he joined the Confederate army with his older brother William, enlisting as a private in the Semmes Rifles, a company raised in Canton and organized as Co. H, 9th Mississippi Infantry. 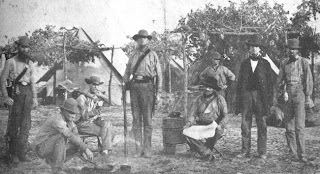 During his service in the 9th Mississippi, John Rogers fought with his regiment at Munfordville, Kentucky, where he was wounded, and at Murfreesboro, Chickamauga, Missionary Ridge, Resaca, and in the battles for Atlanta. He was wounded again at Jonesboro in September, 1864, and then recovered to fight at Franklin and Nashville. Because of his bravery at Franklin, he was promoted to First Lieutenant in April 1865 and commanded Co. F until the army surrendered at Greensboro, North Carolina, on April 26. He was still just nineteen years old. In reflecting on the record of his company in 1903, Rogers wrote that it was doubtful "if there is another county in the State or in the South that can claim as large a list of men in proportion to its population who did their duty as patriots and among whom there were so few deserters." After an exhaustive accounting of each man in the company, Rogers concluded that of the 103 soldiers in the company, fifty-one were killed or wounded in battle during the war. Only eight men were still living in 1903. The image above is of several soldiers in the 9th Mississippi from the early days of the war in Pensacola.

Following the surrender, Rogers walked from North Carolina to his family’s home in Madison County, Mississippi, a distance of nearly 1,000 miles. Back home, he began studying to enter college. In 1867, he was admitted as a junior to the newly reopened University of Mississippi, where he graduated in 1868. At the time, the university had relaxed some of their admission standards for returning Confederate veterans and even offered a "refresher" course to help prepare them for college. While the university received some criticism for this policy, it did allow some veterans to start anew in life and provided a large incoming class for a university in need of students. While attending the university, Rogers also studied law, and was admitted to the bar in Canton in 1868. In Canton, Rogers was a school teacher for a year before moving to Fort Smith, Arkansas, where he began his law practice.

In Fort Smith, Rogers joined a law firm, where he became a partner, and then established his own firm in 1874. Three years later, the Twelfth Judicial Circuit was created, and Rogers was elected circuit judge, where he served for two terms. In 1882, he resigned to run for Congress and was elected and served in the House of Representatives until 1891. A Democrat, Rogers (left) regularly opposed any legislation favoring black voter rights. He also served on the Judiciary Committee and was instrumental in writing legislation to reform criminal procedure in Arkansas.

In March 1891, Rogers retired from Congress and resumed his law practice in Fort Smith. In 1892, he was the chairman of the state's delegation to the Democratic National Convention, where he supported Grover Cleveland of New York for president. Unlike Rogers, Cleveland was not a veteran of the Civil War, as he chose to hire (legally) a Polish immigrant for $150 to serve in the Union Army as his substitute. After being elected President, Cleveland appointed Rogers as a federal judge in Fort Smith in 1896, where he served until his death. 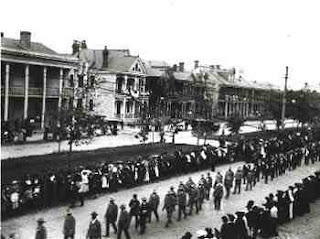 In addition to his duties as a judge, Rogers' military service and political influence made him a popular speaker on the Confederate veterans' circuit. In 1903, he was the keynote speaker at the Thirteenth National United Confederate Veterans reunion in New Orleans. Entitled "The South Vindicated," his speech was a big hit with the veterans present, and was reprinted in its entirety in the Confederate Veteran magazine (taking up more than six full pages). According to the Veteran, the speech was given under less than ideal conditions as "delegates were weary from a prolonged morning session, and they were slow in assembling. He began with a band of music and a frolicking crowd outside the auditorium, which seriously threatened conditions for satisfactory hearing." Somehow, despite the cacophony around him and the length of his speech, he delivered an apparently memorable address both in defense of the Confederacy and in support of the reunited nation. "The South Vindicated" would later be printed in pamphlet form. In addition to speeches and meetings, lots of other activities were available to the veterans in New Orleans (some, no doubt, involving alcohol). On May 22, 1903, a grand parade was held. The photo above shows the line of veterans on St. Charles Avenue. The parade stretched for six miles and took more than two hours to pass. 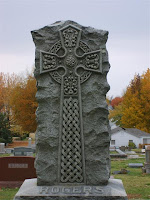 On April 5, 1911, Rogers traveled to Little Rock to hear cases for another judge. Just before going to Little Rock, he caught a cold while on a hunting trip. The cold persisted and worsened, although he continued to hear the cases. On April 17, however, he failed to appear in court and was found dead in his hotel room, the victim of an apparent heart attack. He was survived by his wife and four children, and is buried in Oak Cemetery in Fort Smith. During his life, just as he had walked a great distance to get home after the war ended, Rogers had come a long way for a private from Madison County.