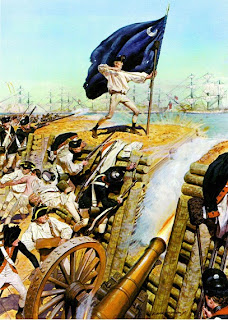 Johann Wilhelm Gasper, born about 1750, immigrated from Germany to America in 1767, arriving in Philadelphia. As he was illiterate, someone else wrote his name on the oath of allegiance incorrectly, and he became ‘William Jasper.’ After working as an indentured servant for a time in Philadelphia, Jasper moved south, leaving a girlfriend, Elizabeth, behind in Pennsylvania. In order to pay for her to come south with him, Jasper joined the colonial army, serving in the 2nd South Carolina Regiment. Although the pay wasn't much, he was soon promoted to sergeant and earned enough to bring Elizabeth to Georgia, where they soon married.

In June, 1776, Jasper was involved in the defense of Fort Moultrie near Charleston, South Carolina. When a British naval shell hit the flagstaff on the fort, Jasper leapt to the top of the parapet and grabbed the South Carolina flag and fixed it to a temporary staff, which he held until a more permanent flagstaff could be obtained. For his bravery under fire, he was offered an officer's commission. Presumably because he couldn't read, he turned it down. Three years later, in 1779, Sergeant Jasper was in the Siege of Savannah, Georgia. During an assault on the British forces, Jasper was mortally wounded while attempting to rescue the regimental flag and soon died. 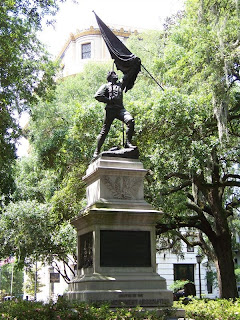 Jasper's heroism at Charleston and subsequent death at Savannah are immortalized by a monument, unveiled in 1888, in Madison Square in Savannah. The bronze statue (left) was designed by sculptor Alexander Doyle, and includes bas relief panels depicting Jasper's military service. Alexander Doyle (1857–1922) was one of the nation's prominent sculptors of the era and three of his works are included in the National Statuary Hall in Washington, D.C. Doyle was also responsible for a group of sculptures in New Orleans, including the Robert E. Lee monument at Lee Circle, the equestrian statue of General P. G. T. Beauregard at the entrance to City Park and the General Albert Sydney Johnston statue at the Army of the Tennessee memorial in Metairie Cemetery, completed in 1887. Perhaps his finest sculpture is “Calling the Roll," the marble figure of an unknown Confederate soldier, also located in Metairie Cemetery. The Savannah monument was completed during this same period.

Long before the memorial in Savannah, the story of William Jasper's bravery during the American Revolution was popularized by Mason Locke Weems (left), better known as Parson Weems, who wrote several very successful if not entirely accurate books for young readers in the early 19th century. Among his most famous works were The Life of Washington (1800), in which he invented the story of George Washington and the cherry tree, and The Life of Francis Marion (below, right), written in 1805. As both Sgt. Jasper and another Revolutionary War sergeant, John Newton, both served with Francis Marion, Weems depicted the two men in his writing as something of a set. Although both were real people, Weems took certain liberties with the facts to embellish the story for his audience. In Parson Weems' account, for example, Sgt. Newton manages to save a group of American prisoners from execution by capturing their British guards at Savannah. Unfortunately, there are no accounts from the period that suggest that this actually occurred, and appears instead to be have been entirely invented by Parson Weems.*

Although Parson Weems’ books were hardly trustworthy from a history standpoint, they were extremely popular and apparently influenced the naming of counties and towns across the nation in the early 1800s. Because Weems had lumped them together in his work, so too were counties named for them tied together. There are no less than eight counties named for William Jasper, and six for John Newton. Because Weems tied the stories of Sgts. Jasper and Newton together in his work, Newton county and Jasper county are adjacent to each other in four states. In other instances, Newton is the county seat of Jasper County, or vice versa.

In Mississippi, the same pattern holds true: Jasper County, named for Sgt. William Jasper, is located next to Newton County. However, the official story about Newton County is that it is named for Sir Isaac Newton. If this is true, then it is unlike all of the other states with similar arrangements. Although it is perhaps more noble to name a county after Sir Isaac Newton, logic suggests that Newton County was actually named for Sgt. John Newton, not Sir Isaac Newton. To further strengthen the argument, several other Mississippi counties located in the same part of the state and adjacent to each other are named for heroes of the American Revolution, including Greene County (Nathaniel Greene), Wayne County (Anthony Wayne), Smith County (Major David Smith) and Jones County (John Paul Jones).

While these characters from the American Revolution are hardly household names today, they were clearly important figures to a nation in search of an identity in the early years of the republic. The fact that Jasper and Newton counties are grouped together in states across the nation also show the power and influence of popular culture, then as now.


* In fact, according to an American officer who took part in the campaign, the real-life Newton “was a Thief & a Villain."