The Meridian Doughboy and E.M. Viquesney 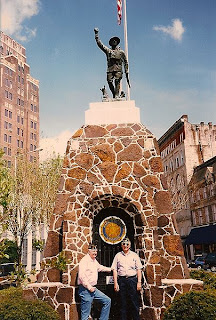 On an island bounded by 6th and 7th Streets and 23rd Avenue in downtown Meridian, Mississippi, stands an impressive monument. Dedicated on November 11, 1927, (Armistice Day), the "Doughboy" statue depicts an American soldier during World War I as he walks through no-man's land, complete with barbed wire and tree stumps, holding a rifle in his left hand and a grenade in his upraised right hand. The statue was placed in memory of "those of Lauderdale County who patriotically answered the call of their country to uphold justice and the rights of humanity" during the Great War. Supporting the statue is a triangular base of stone and includes an interior "shrine" protected by an iron gate.

Officially known as the “Spirit of the American Doughboy,” the monument was specifically dedicated to the memory of Thomas Clay Carter, a native of Meridian. Carter (left) attended Marion Military Institute in Alabama and the University of Virginia before enlisting in the U.S. Army. During World War I, he was acting company commander of the 320th Machine Gun Battalion, and was killed in action in October, 1918, in the Argonne Forest while checking for enemy gun emplacements. First buried in France, his remains were later reburied at Arlington National Cemetery. Although it's likely that few people who pass the monument daily have ever heard of T.C. Carter, the monument has been a centerpiece of Meridian's downtown landscape since it was dedicated. (For a postcard view of the monument, please see the bottom of the page). The Meridian doughboy statue is the only one of its kind in Mississippi (unlike the ubiquitous Confederate memorials across the state). The "Spirit of the American Doughboy" statue, however, is hardly unique and has an interesting history all its own. 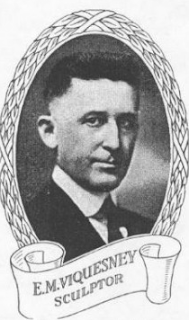 The statue was actually one of a series of sculptures designed and mass produced in the 1920s and 1930s by Ernest Moore (E.M.) Viquesney. Born in 1876, Viquesney (right) was the only son of Alfred Paul and Jane Viquesney. Alfred's father, Charles, was a stonemason in France. In 1842, Charles emigrated to the United States, possibly to work on the U.S. Capitol building. Although he went back to France just before the Civil War, three of his sons remained behind, including Jules, who served as a musician in the 70th Indiana Infantry. Alfred, who eventually moved to Spencer, Indiana, was also a stonemason and operated a statuary and monument business in Spencer. Thus, Ernest (known as "Dick") learned sculpting and stonemasonry from his father at an early age.

Dick Viquesney (pronounced "vi-kay-nee") lived in Spencer, Indiana for most of his life. During the Spanish American War, however, he served in the military and was stationed in Pensacola. In 1904, he married Cora Barnes, and from 1905 to 1922, they resided in Americus, Georgia. There, he was employed at Clark's Monumental Works and Schneider's Marble Company, where he worked on various projects, including the National Cemetery at Andersonville and possibly the carvings at Stone Mountain. While in Americus, in 1918, Viquesney first conceived of the idea of a monument to America's World War I veterans, and the "Spirit of the American Doughboy" was born. 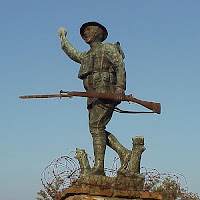 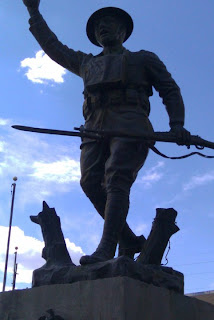 Although Dick Viquesney was involved in a variety of business pursuits in Spencer, including the construction of the Tivoli Theater (which still stands) and an office building (which burned), the "Spirit of the American Doughboy" was his signature achievement. Made at first from pressed copper, Viquesney later offered the statue in other materials, including stone. From 1921 until 1943, hundreds of "Doughboy" statues, including thousands of miniature versions, were purchased across the United States. The statues were not only popular because of the immediacy of the Great War in the 1920s, but they were very affordable and fairly light (the bronze models were hollow). In addition to the statue in Meridian, original Viquesney statues can be found regionally in Birmingham and Bessemer, Alabama, and in Helena, Arkansas. In all, the "Spirit of the American Doughboy" was installed in 39 states, from Maine to Wyoming.

Two summers ago, just by chance I took a photo of the Viquesney monument in Price, Utah (left). Originally located in Hiawatha, Utah, it was dedicated in 1922, and was the first statue installed west of the Mississippi. It was moved to Price in 1989 after the last structures in Hiawatha, an old mining town, were torn down. Meridian's doughboy is the same as the one in Price, but wasn't dedicated until 1927. On that same day, November 11, eleven other statues were dedicated around the country. Pictured above the Price, Utah, statue is the doughboy in Fort Smith, Arkansas. 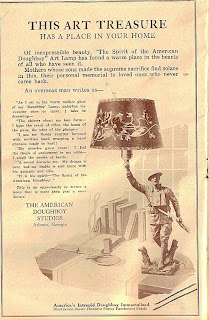 The majority of doughboys were purchased in the 1920s; both the Depression and the next World War cooled America's interest in "The War to End All Wars," and sales declined by the mid-1930s. Viquesney attempted to create equally successful statues of other subjects, including a World War II statue, but to no avail. He was able to market a line of doughboy-themed products, however. For example, he sold miniature versions of the doughboy in the form of lamps, candle holders and desktop ornaments. There were also similar statues created and sold by competitors, and at times the legal and advertising struggle to sell the "genuine" product seemed as fierce as the fighting on the Western Front. Today, many copies are attributed wrongly to Viquesney and many of his works are wrongly credited to other sculptors.*

On October 2, 1933, Cora Viquesney died of diphtheria. Three years later, Dick married Betty Sadler, who was the organist for the Spencer Methodist Church for twenty-five years. For ten years, they lived a good life. In fact, he purchased an electric Hammond organ for her and they performed throughout World War II for USOs in the region. However, Betty died in August 1946 at age 52. Heartbroken, he committed suicide in his garage on October 4, 1946. He left behind a note, directions for his funeral, and a rather lengthy, self-promoting obituary (throughout his life he had advertised himself as "a famous sculptor" and had expounded on the perfection and beauty of his own work in his advertising). He is buried in Riverside Cemetery in Spencer, Indiana, alongside his mother and father, and both wives. Overlooking them all is another Viquesney statue called "The Unveiling," (left) originally done as a memorial to Cora in 1934. Ernest Moore Viquesney had no children and has no descendants...unless you count the dozens of doughboys which still stand in silent tribute to a generation of heroes across the land.

* For a listing of all known Viquesney doughboy statues and a extensive history and biography, please visit http://doughboysearcher.weebly.com/. 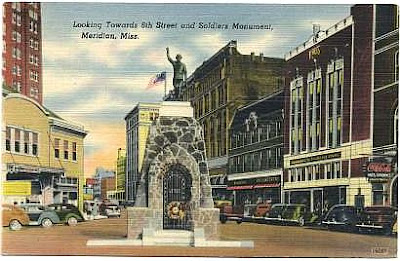