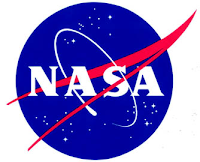 In 1961, President John F. Kennedy announced plans for the United States to send a manned expedition to the moon by the end of the decade. Needing a testing facility for various space-related engines, the National Aeronautics and Space Administration (NASA), at the urging of Mississippi Senator John C. Stennis, selected Hancock County as the site to test the engines for America’s first journeys to the moon via the Apollo space program. The site was chosen for its rough terrain, isolation from large population areas, access to transportation and climate, among other factors. 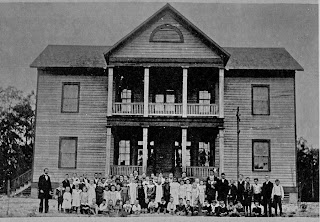 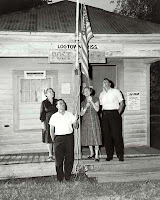 Located within the 125,000-acre buffer zone of the area that would become the Stennis Space Center* were a number of small communities, including Logtown, Napoleon, Santa Rosa, Gainesville and Westonia, all of which were centered around the Weston Lumber Company in Logtown. Before construction of the Stennis Space Center could proceed, these communities and their structures had to be removed. Thus, approximately 700 families were eventually relocated. The Logtown community, located approximately four miles north of Pearlington, was the home of the Weston Lumber Company. Founded in 1848 by Horatio Weston,** the Weston lumber mills operated continuously for almost a century and remained one of the largest milling operations in the United States during the 1940s. In the photos here, the image above is the Logtown School (date unknown). Below it is the Logtown Post Office, taken when the flag was lowered for the last time. Lollie Bell Wright, the Logtown Postmaster, had worked at the post office for thirty-six years before learning that NASA would be building a test facility there. The Napoleon site, located six miles from Pearlington, originated from a British land grant originally given to John Claudius Favre and then to his son Simon Favre, who settled the community of Napoleon in 1798. Both Logtown and Napoleon were located along the Pearl River. Santa Rosa, meanwhile, was a small town situated in an area known as the Honey Island Swamp. Santa Rosa included a couple of stores, a church, post office, the Aaron Academy (a one-room schoolhouse), and a number of establishments engaged in the illegal sale of whiskey. Santa Rosa also had the dubious reputation of being a refuge for pirates operating along the Mississippi Gulf Coast. 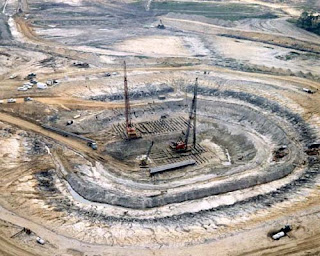 Once the land had been secured and the inhabitants relocated, construction of the facility proceeded. At the peak of its construction in the summer of 1965, the Stennis Center employed nearly 6,100 workers who constructed three 200-foot-tall test stands. At the time, it was the largest construction project in the state of Mississippi and the second largest in the nation. To lead the development of the massive undertaking, NASA turned to Navy Captain William C. "Bill" Fortune (below, right). A graduate of the Naval Academy and MIT, Fortune was responsible for launching the first large missile ever from the deck of the U.S.S. Midway in 1947 and had a distinguished career in rocket development. Captain Fortune took charge of the project in 1962. The facility emerged from the swampy terrain and was completed in just three years. 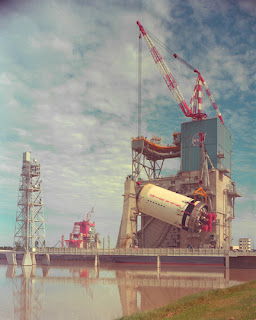 The center's mission in the beginning was to test all first and second stages of the Saturn V rocket for the Apollo space program. The work began with a static test firing on April 23, 1966, and continued into the early 1970s. The photo to the left shows one of the stages of the Saturn V rocket being lifted onto the A-2 test stand in 1967. In 1975, the Space Shuttle Main Engine was tested at Stennis for the first time, and all engines used to boost the Space Shuttle into low-Earth orbit have been flight certified at Stennis on the same test stands used for the Apollo and Skylab programs. Currently, the Stennis Space Center hosts thirty other agencies in addition to NASA in the space, environmental and defense fields. The agencies include the U.S. Navy's oceanographic research community. Testing of NASA engines are still being conducted at the facility as well. In fact, within the past week, NASA began testing the J-2X rocket engine being developed for the Marshall Space Flight Center. It is the first liquid oxygen and liquid hydrogen rocket engine developed to carry human beings into space in 40 years.

* The original name of the facility was Mississippi Test Operations, changed to Mississippi Test Facility in 1965. In 1974, it was renamed the National Space Technology Laboratories and then in 1988, the center was renamed yet again as the Stennis Space Center.
** For more information on Horatio Weston and Logtown, please see the April 3 post "Horatio Weston: Mr. Outside:"
http://andspeakingofwhich.blogspot.com/2012/04/horatio-weston-mr-outside.html