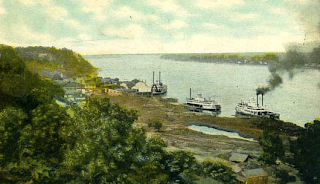 May 7, 1840, is a date long remembered in Natchez as a day of tragedy and destruction. On that day, a massive tornado struck Natchez, killing at least 317 people, most of them on flatboats sunk in the Mississippi River.  Known today as the Great Natchez Tornado, estimates of damages were in the millions.

On the day of the storm, the weather in Natchez was cloudy and warm, but nothing unusual for the season. Certainly, there were no expectations of bad weather. At noon, however, according to a contemporary observer, the sky to the southwest "assumed a darker and more tempestuous aspect, the gloom and turbulence increasing every moment." At about 12:45 pm, the roar of the approaching storm could be distinctly heard as it moved up the Mississippi River. An hour later, the clouds "assumed an almost pitchy darkness, curling, rushing, roaring above..." 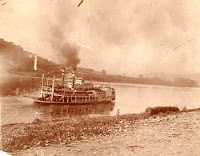 Skipping across the river below Vidalia, Louisiana, the tornado moved up the east bank of the river past The Briars, about a mile and a half south of town. Although The Briars was only slightly damaged, the tornado completely destroyed the mansion called the Bellevue. Heading north, the mile-wide twister directly hit Natchez-Under-the-Hill, smashing stores and houses and tossing about sixty flatboats into the river, drowning their crews and passengers. Steamboats at Natchez Landing were also hit. Among the riverboats lost or heavily damaged were the Prairie, the St. Lawrence (above right), and the steamboat Hinds, which sank with most of her crew. Three years earlier, the Prairie had been involved in a race with the Ben Sherrod a few miles south of Natchez. The Ben Sherrod caught fire during the race and exploded, killing seventy-two people. Although other vessels tried to assist the Ben Sherrod, the captain of the Prairie infamously continued on to Natchez.

On the bluffs in the city proper, few structures escaped damage and many were completely destroyed. The steeples of both the Presbyterian and Methodist churches were blown off, and the Episcopal church lost its roof. The damage to the Presbyterian Church, built ten years earlier in 1830, meant that the town's official clock was lost, as it was housed in the belfry and maintained by the city. The present church belfry was built to house a new clock. Among the public structures leveled by the tornado were the Southern Exchange, the railroad depot, Natchez theater, Planter's Hotel and the Steam-boat Hotel. In assessing the condition of the city the day after the storm, the Natchez Free Trader wrote: 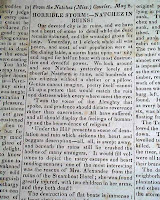 Our devoted city is in ruins, and we have not a heart of stone to detail while the dead remain unburied and the wounded groan for help. Yesterday, at 1 o'clock, while all was peace, and most of our population were at the dining table, a storm burst upon our city and raged for half an hour with most destructive and dreadful power. We look around and see Natchez, yesterday lovely and cheerful Natchez, in ruins, and hundreds of our citizens without a shelter or a pillow. Genius cannot imagine, poetry itself cannot fill up a picture that would match the ruin and distress that every where meets the eye.
'Twas the voice of the Almighty that spoke, and prudence should dictate reverence rather than execration. All have suffered, and all should display the feelings of humanity and the benevolence of religion!
"Under the Hill" presents a scene of desolation and ruin which sickens the heart and beggars description - all, all, is swept away, and beneath the ruins still lay crushed the bodies of many strangers. It would fill volumes to depict the many escapes and heartrending scenes..." 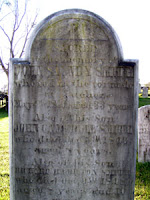 The final death toll was forty-seven in Natchez (with one in Vidalia) and 269 on the river.  Because slaves may not have been properly counted, the actual number of dead may be even higher. Even so, the Great Natchez Tornado ranks as the second deadliest in American history and is distinctive because there were far more deaths than injured (there were 109 people listed as injured). In the days following the storm, the awful chore of burying the dead must have been overwhelming for the survivors, and the task of rebuilding the ravaged city must have seemed daunting at best. Today, the only reminders of the tornado are in the city cemetery, where many victims of the storm were laid to rest. One of those victims was John Smith, whose gravestone (above) reads "Sacred to the memory of John Saunby Smith who fell in the tornado at Natchez May 6, 1840 aged 33 yrs." Please note the date of the tornado is off by one day.