The Death of Benjamin Hardin Helm 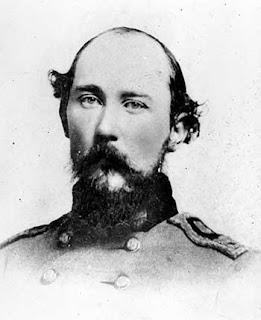 During a recent visit to Chickamauga National Military Park, I made a quick trek into the woods to visit a spot which is emblematic of the war which divided the nation, a state and a family. It is the spot where Benjamin Helm was mortally wounded.

A native of Bardstown, Kentucky, Benjamin Hardin Helm (right) was an attorney and politician before the war. Born in 1831, Ben was the son of Kentucky Governor John Helm and attended West Point. After graduating from West Point, he studied law at the University of Louisville and at Harvard, and served in the state legislature and as attorney general. With the coming of the Civil War, Helm was offered the position of Union Army paymaster by Abraham Lincoln, but he declined the offer to serve in the Confederate Army. Initially a colonel, Benjamin Hardin Helm was promoted to brigadier general on March 14, 1862, and went on to command the famous "Orphan Brigade," composed of men recruited from Kentucky to fight for the Confederacy. Because Kentucky never left the Union, the men, like Pvt. Robert Patterson (below) were considered "orphans" because they could not return to their home state. The brigade's original commander was John C. Breckinridge, former Vice President of the United States. 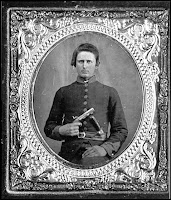 The Orphan Brigade fought at Shiloh and Baton Rouge. Following the battle of Baton Rouge, the brigade was sent to Yazoo City to guard the CSS Arkansas. Sent to Tennessee, the Orphans were brought back to Mississippi during the Vicksburg Campaign to serve in Joseph E. Johnston's so-called "Army of Relief." During the siege of Vicksburg, Helm and his "Orphans" spent the majority of the time sitting idle in Madison County while Grant hammered away at Pemberton's army in Vicksburg. They would participate in the Siege of Jackson in July, where they helped repel an ill-advised Union assault on the Confederate left. 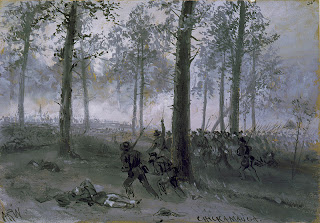 In the fall of 1863, Helm's brigade was back with Braxton Bragg's Army of Tennessee. On September 20, Bragg's army, reinforced by Longtreet's Corps from the Army of Northern Virginia, attacked Union Major General William Rosecrans' army at Chickamauga. At about 9:30 a.m., Breckinridge's and Cleburne's divisions were ordered forward. Helm's brigade, as part of Breckinridge's division, attacked the left end of the Union line. In repeated assaults, during which some of Helm's men got within a few yards of the Federal line, more than a third of the Orphan brigade was shot down within an hour.

During the fighting, Helm, who was mounted, was shot through the left side of his chest. Bleeding profusely, he swayed in the saddle for a brief time before falling to the ground. After surgeons examined him, they quickly determined that his wounds were fatal. Lingering for several hours, Helm was informed that the Confederates had won the battle, to which he responded with a whispered "Victory!" Benjamin Hardin Helm was pronounced dead the next day. He was thirty-two years old. This monument at Chickamauga marks the site where Helm was mortally wounded. His body was originally buried in Atlanta and later moved to the family's cemetery in Kentucky.

Helm's death was but one of more than 18,000 Confederates killed, wounded or missing at Chickamauga. Why, then, is his death emblematic of the war that divided the nation? It is because Benjamin Hardin Helm was President Abraham Lincoln's own brother-in-law, killed while fighting for the Confederacy.

In 1856, Helm married Emilie Todd, Mary Todd Lincoln's half-sister. At the time, Emilie was just twenty years old. Despite the fact that Ben Helm spurned Lincoln's offer in 1861 and joined the Confederate Army, his death at Chickamauga was mourned by both Emilie and the Lincolns. In fact, the young widow was invited to visit the White House in late 1863, and she accepted, passing through the Union lines with her daughter Katherine. When protests were lodged against a "Rebel" being in the White House, the President replied, “Mrs. Lincoln and I will allow anyone we choose to visit us in the White House.”


Mary Todd Lincoln (above) and Emilie Todd Helm (below) 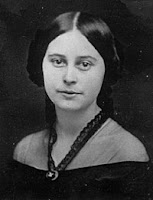 Over time, the good relations with the Lincolns soured over a number of issues. Following his assassination in 1865, however, Emilie reconciled with her northern kin. Although she was active in the United Daughters of the Confederacy, she also worked for reconciliation between north and south and was close to her nephew, Robert Todd Lincoln. Mrs. Helm, who never remarried, attended many Confederate Veterans' reunions and was known as the "Mother of the Brigade" by the former "Orphans." Wearing mourning clothes for the remainder of her life, Emilie Todd Helm lived until 1930, dying at the ripe old age of 93. Curiously, she was not buried with her beloved husband but is instead interred in the Todd family plot in the Lexington, Kentucky, Cemetery.