Sixty-seven years ago today, millions of people across Europe, the United States and Canada (and elsewhere) poured into the streets to celebrate the end of the Second World War in Europe. Although word began to circulate the day before that Germany was surrendering to the Allies, the celebrations began in earnest on May 8, known today as VE (or "Victory in Europe") Day. Nazi Germany's capitulation was verified when President Truman and Prime Minister Winston Churchill each gave speeches to their respective citizens. In Truman's address, he read the following to the American people: 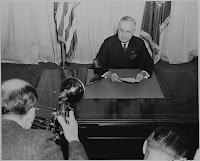 For this victory, we join in offering our thanks to the Providence which has guided and sustained us through the dark days of adversity. Our rejoicing is sobered and subdued by a supreme consciousness of the terrible price we have paid to rid the world of Hitler and his evil band. Let us not forget, my fellow Americans, the sorrow and the heartache which today abide in the homes of so many of our neighbors - neighbors whose most priceless possession has been rendered as a sacrifice to redeem our liberty. We must work to finish the war. Our victory is but half-won. The West is free, but the East is still in bondage to the treacherous tyranny of the Japanese. When the last Japanese division has surrendered unconditionally, then only will our fighting job be done. 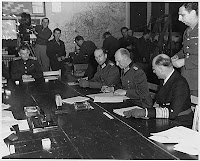 VE Day, officially, is the day that the Allies, including the Soviet Union, formally accepted the unconditional surrender of the armed forces of Nazi Germany. Germany's surrender was tendered to the Allies by Admiral Karl Dönitz, designated as the German President after Adolf Hitler's suicide in the bunker on April 30. A career naval officer and a veteran of World War I, Karl Dönitz worked throughout the war with Germany's U-boat fleet, which caused massive damage to Allied shipping in the Atlantic. After the war, he was found guilty of war crimes and was sentenced to ten years in prison. The formal surrender took place in Reims, France, on May 7 in a schoolhouse which served as Gen. Eisenhower's headquarters. The next day, at the request of the Soviets, it was signed again in Berlin.

With news of the surrender of Nazi Germany, wild celebrations swept the world. In London, massive crowds crowded into Trafalgar Square and and at Buckingham Palace, where King George VI, Queen Elizabeth, and Churchill appeared together on the balcony. In the New Yorker, Mollie Panter-Downs described the VE celebrations in London:

...American sailors and laughing girls formed a conga line down the middle of Piccadilly and cockneys linked arms in the Lambeth Walk. It was a day and night of no fixed plan and no organized merriment. Each group danced its own dance, sang its own song, and went its own way as the spirit moved it. The most tolerant, self-effacing people in London on V-E Day were the police, who simply stood by, smiling benignly, while soldiers swung by one arm from lamp standards and laughing groups tore down hoardings to build the evening's bonfires...The young service men and women who swung arm in arm down the middle of every street, singing and swarming over the few cars rash enough to come out, were simply happy with an immense holiday happiness. They were the liberated people who, like their counterparts in every celebrating capital that night, were young enough to outlive the past and to look forward to an unspoilt future. Their gaiety was very moving.

In the U.S., President Truman, who also celebrated his 61st birthday that day, dedicated the victory to President Roosevelt, who had died less than a month before (on April 12). Huge crowds thronged the streets of New York City, Los Angeles, Miami, Chicago and hundreds of other towns and cities across the nation, including Norfolk, Virginia (left). The festive spirit was a bit less in the United States than in Europe, however, because of the ongoing war in the Pacific.

On the front lines in Germany, where millions of Allied troops had just ceased fighting, some just the day before, service men and women celebrated no less enthusiastically, if perhaps in different ways. Frank Hauck, from Brooklyn, New York, was a member of the 278th Signal Pigeon Company. Hauck trained in Gulfport, Mississippi, before shipping out to Europe. Despite the fact that he was in a unit assigned to train pigeons, Hauck and his comrades in arms saw plenty of action. On May 8, he posed for a photo in a captured Nazi Focke-Wulf 109 airplane (above). Another soldier who trained in Mississippi (at Camp Shelby) was William Lee Preston, a first lieutenant with the Third Army's 65th Infantry Division. His account of his feelings upon hearing the news of Germany's surrender, in a letter to his brother, was a bit reflective: 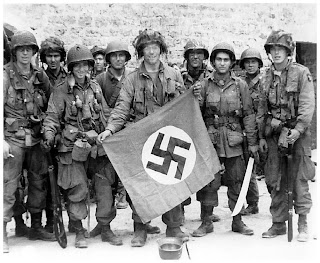 Yes, the war in Europe is over. I don't know what the reaction was in the states on a whole. Over a patched up radio we heard that ticker tape and paper floated down from New York buildings. We heard that there were wild celebrations in the streets in London by civilians, English and American soldiers. But, John, the front line troops didn't celebrate. Most of the men merely read the story of victory from the division bulletin sent to the troops, said something like "I'm glad," and walked away. Perhaps it was a different story in their hearts, or perhaps they were too tired, or thinking of home too much, or thinking of their buddies who didn't live to see the victory, to do much celebrating or merry making. But I'm sure of one thing—the troops were glad they wouldn't have to fight anymore—I was.

Although much of the world's population celebrated the fall of the Third Reich, VE Day was tempered by the horrors of the concentration camps found by the Allies throughout Germany and elsewhere, and by the widespread devastation wrought by the war. Most significantly, Frank Hauck and the rest of the Allies knew the job wasn't finished. Victory over Japan was still to be earned.