On August 1, 1954, the Grenada (MS) Sentinel-Star reported that Mrs. Kayo McClamrock was arrested and fined in Panola County for possession of liquor she had purchased on a trip to Memphis. Apparently, McClamrock was hosting a party that evening to celebrate the recent dedication of the Grenada Dam (no doubt a good excuse for a party!). Deputy Sheriff Leon Brown, who also ran a restaurant in Batesville, stopped McClamrock with a search warrant already filled out. The sheriff's office, it seems, had been given a tip by an informer - perhaps someone not invited to the party. When arrested, Mrs. McClamrock stated that Brown complained that she had not returned from Memphis "on schedule" and had made him "late for his lunch." She was fined $125, including costs.

Margaret Kincaid McClamrock purchased her whiskey at Buster's Liquors on South Bellevue in Memphis. Buster's was owned by Romulus "Buster" Hammond, Jr. (seen here, on the right, from the 1960s), an Ole Miss man and an Army veteran. Hammond had previously been in the grocery business with a partner named Kirk, and the short-lived "Hamkirk" grocery store made news when it opened on Sundays in Memphis. When that business folded, Hammond concentrated on liquor. After several moves around Memphis, the store was finally located at the corner of Poplar and Highland. The store is still owned by members of the Hammond family and is going strong. 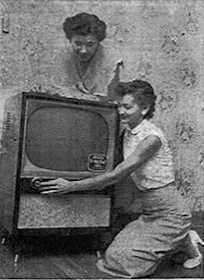 When McClamrock was arrested, the citizens of Batesville and Panola County, apparently upset about the way the sheriff's office handled the situation, took up a collection and gave Margaret McClamrock $125, mostly in quarters and half-dollars. The newspaper reported that "they could have taken up $1,000 just as easily as they got up to $125." Furthermore, Buster's Liquor Store purchased and presented the McClamrocks with a new 21-inch Philco television set (right). In explaining the gift, Buster Hammond said that "I count my customers as my guests. Naturally, when you have a guest you want to treat that person with courtesy and consideration. I feel terrible about the whole situation and I hope that this gesture will make up for some of the embarrassment that this family has been caused." Now that's customer service!!

All the actors in this little drama are now deceased, and it would have all been forgotten if not for Buster's, a store proud of its history.
Posted by Jim Woodrick at 7:29 AM