During the siege of Vicksburg, Union General Ulysses S. Grant sent a small raiding party behind Confederate lines to disrupt communications and create havoc on the railroads. Forty men from the 5th Illinois Cavalry were picked for this mission, under the command of Captain Calvin A. Mann. The 6' tall, blonde, blue-eyed Mann graduated from the St. Louis Medical College in 1858. When he enlisted in September, 1861, however, he joined the 5th Illinois Cavalry as a 2nd Lieutenant.

The small expedition began by steaming down the Mississippi to Rodney. After landing at Rodney, the raiders rode to Brookhaven on June 24, 1863. There, they burned twelve railroad cars before moving on toward Monticello. After the Union cavalry left Brookhaven, they were pursued by approximately twenty-two Confederate soldiers and local citizens from the Brookhaven area under the command of 1st Lieutenant William M. Wilson of Co. B, 43rd Tennessee Infantry, a native of Rhea County, Tennessee. The group was hastily assembled by the commander of a Confederate training camp near Brookhaven.

Crossing the Pearl River at Monticello, the Union raiders cut the ferry adrift and headed for Ellisville. When Lt. Wilson arrived at the Pearl, he had to find another river crossing. He also had to spend valuable time recruiting more men and horses, as the Brookhaven home guard refused to go any further in pursuit of the Yankees. Captain Mann, meanwhile, proceeded east and crossed the Leaf River. 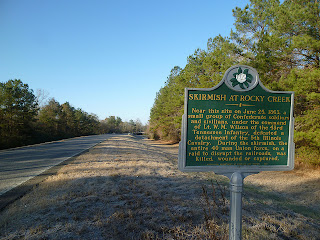 Thinking he had shaken the Confederates, Mann allowed his men to camp for the night. Wilson’s Confederates, however, were hot on the trail and rode hard for Ellisville. Arriving at Rocky Creek on June 25,  they were surprised to learn that the Federals had not yet arrived. As such, Wilson dismounted his force of approximately 35 men and boys and waited. When the raiders arrived, the fighting was brief and decisive. Allowing Mann's troopers to approach within a few yards of Rocky Creek, a single volley from the Confederates killed four men and wounded five. Captain Mann was thrown from his horse and captured. The remaining Federals scattered into the nearby woods but were soon rounded up and surrendered. Four of the wounded were left in Ellisville, while the rest were taken to Jackson as prisoners. The captured horses, guns and equipment were apparently taken by citizens from the surrounding area for their own use. Lt. Wilson wrote that they could probably be recovered but that it would take a force to do it.

As a small engagement, few today are familiar with this episode of the Civil War in Mississippi, although it has all the elements of a great story. To mark the site of the skirmish, there is a state historical marker on Hwy. 588, approximately 3.5 miles west of Ellisville.

As a postscript, Captain Mann survived the war and practiced medicine in Perryville, Missouri, and in Illinois. He died in 1902 and is buried in the Diamond Cross Cemetery in Randolph County, Illinois.