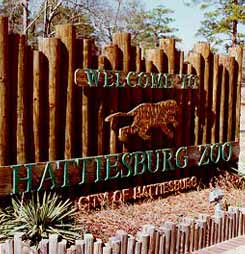 In the early 1900s, folks in Hattiesburg started bringing animals on their outings to Kamper Park. Popular with locals and visitors alike, the animals soon became a tradition. Recognizing that, the Hattiesburg Optimist Club began raising funds to build an actual zoo in the park, and on Easter Sunday in 1950, the zoo opened with several small exhibits. Kamper Park, where the zoo is located, was named for the man who gave the property to the city. In 1902, John Kamper donated forty acres to the United Daughters of the Confederacy, led in Hattiesburg by Ida V. May Hardy, wife of Captain William Hardy, founder of the city. Mrs. Hardy apparently solicited the gift from Kamper. The UDC, in turn, donated the park property to the city in 1908. Interestingly, though, Kamper was not a resident of Hattiesburg.

John Frederick Kamper, for whom the park is named, was a successful businessman and banker in Meridian. Born in Bremen, Germany, in 1841, Kamper emigrated to the United States with his family in 1853. Living at first in Mobile, the family eventually settled in Enterprise, Mississippi. During the Civil War, Kamper served in Co. D, 12th Alabama Infantry. The 12th Alabama fought in the eastern theater in the Army of Northern Virginia. After the war, he engaged in various banking and business activities, including investments in the timber industry. No doubt, he developed a close relationship with Captain Hardy in Meridian, where Kamper moved to in 1900 and where he was vice president of First National Bank at the time of his death. When Hardy moved from Meridian to establish what became Hattiesburg (named for his first wife who died in Meridian), Kamper invested in the developing piney woods area. In addition to his business interests in Meridian, Hattiesburg and elsewhere, Kamper was a prominent Freemason, as well as a member of the Order of Elks and Knights of Pythias. He died suddenly in 1917, surrounded by his family at his home near Highland Park. He is buried in Rose Hill Cemetery in Meridian.

Today, the Zoo at Kamper Park is home to more than fifty-five species of animals, including prairie dogs, monkeys, tigers, zebras and alligators, and includes a train, gift shop, etc. The first elephant arriving at Kamper Park seems to have been named "Mrs. Hattie," for Hardy's first wife. If Ida Hardy had any hand in bestowing this honor, one might consider the appropriateness of a second wife naming an elephant after her husband's first wife...