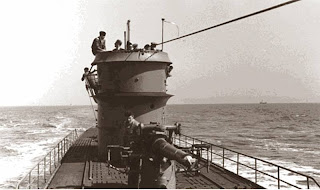 In the summer of 1942, the SS Robert E. Lee, a 5,184-ton steam passenger ship, was heading northwest through the Gulf of Mexico toward the mouth of the Mississippi River and New Orleans. On this trip, the Robert E. Lee was escorted by the USN patrol vessel PC-566. The Robert E. Lee had sailed from Trinidad carrying 270 passengers, several of whom were survivors of ships that had been victims of German submarines. Waiting in the warm waters of the Gulf of Mexico for some unsuspecting prey was U-166.

This German submarine was laid down on December 6, 1940, at the shipyard in Bremen and commissioned on March 23, 1942. U-166 was commanded by Oberleutnant Hans-Günther Kuhlmann. Kuhlmann (left) was a native of Cologne and entered military service as a cadet in 1932. Accepted as a submariner, he was given command of his own U-boat in July 1941. When U-166 (above) was commissioned, Kuhlmann took command and sailed out of Norway to France and then headed for the Caribbean and the Gulf of Mexico, where merchant ships still sailed unescorted and Gulf Coast residents generally felt immune to the threat of German U-boats.

U-166 got to work as soon as she entered the Caribbean, sinking two merchant vessels and a small fishing boat loaded with twenty tons of onions off the coast of Cuba. The fishing boat was named Gertrude, which happened to be Kuhlmann's wife's name. For the next two weeks, U-166 patrolled off of Cuba and slowly moved into the northern Gulf of Mexico, looking for larger prizes. By the end of July, U-166 was off the mouth of the Mississippi River, well positioned to intercept ships coming in and out of New Orleans. On July 30, the U-boat crew saw smoke off to the southeast. It was the Robert E. Lee. Unbeknownst to Kuhlmann, it was also the PC-566, and that meant trouble for the U-boat. Laid down in Houston, Texas, by the Brown Shipbuilding Company, the PC-566 was fitted with depth charges designed for anti-submarine service. Under the command of Lieutenant Commander H. G. Claudius, the sub hunter had been in the Gulf of Mexico and the Caribbean for just a few weeks. 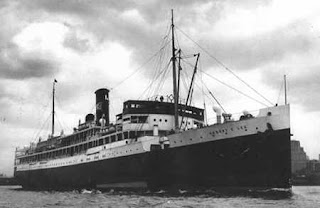 Firing a torpedo, the U-166 quickly sank the Robert E. Lee (right). Of the 270 passengers aboard, twenty were lost at sea. The escort ship responded by attacking the submarine with her depth charges. While the crew of the PC-566 claimed they sank the U-boat, there was plenty of doubt at the time, mainly because on August 1, a U-boat was spotted by Coast Guard aircraft 100 miles off the coast of Houma, Louisiana. Seemingly the same submarine, the plane attacked and appeared to hit the U-boat and the pilots were credited with the kill of U-166.

It was not until 2001, however, that the truth was revealed when the wreckage of the Robert E. Lee was located in 5,000 feet of water. Located less than two miles away was another, surprising discovery: the U-166. Fifty-nine years later, credit for sinking U-166 could finally be given to the crew of PC-566. The submarine spotted by the aircraft, it turns out, was another U-boat, and she apparently survived the attack. Hans-Günther Kuhlmann and 51 crew members of U-166 still lie at the bottom of the Gulf of Mexico, and the location of the sub has been designated as a war grave, protecting it from any future salvage operations.

As a postscript, the only vessel surviving this incident, the PC-566 (above), was decommissioned in 1947, named the Honesdale in the 1950s (serving in the Atlantic Reserve Fleet) and then sold to Venezuela. Renamed Calamar, she served in the Venezuelan navy until the 1970s.