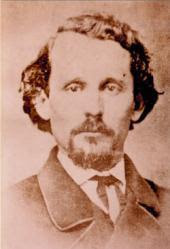 Colonel Jeffery E. Forrest, a native of Tippah County, Mississippi, was a younger brother of Nathan Bedford Forrest. Like Nathan, Jeffery enlisted at the beginning of the war as a private. By 1864, however, he was commanding a brigade of cavalry under his brother. At the battle of Okolona, fought 148 years ago today (February 22, 1864) Jeffrey was shot in the throat while leading a charge against a Union position on the Pontotoc Road near Prairie Mount. Seeing him fall, Nathan Bedford Forrest rushed to his brother's side and ‘dropped to his knees and held [his] head in his arms' before he died. Overcome with emotion, Lt. Gen. Forrest helped led the attack, breaking the roadblock. Toward sunset, Forrest's command assaulted the final Union position at Ivey's Hill. During the night, the battered Federal troops retreated toward Memphis, sealing a dramatic victory for Forrest's Confederate cavalry at Okolona. Jeffrey was buried in the Odd Fellows Cemetery in Aberdeen, but was reinterred in 1868 to Elmwood Cemetery in Memphis.