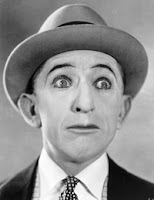 Lawrence "Larry" Semon was an actor, director, producer, and screenwriter during the silent film era. Born in West Point, Mississippi, in 1889, he was the son of a vaudeville magician known as "Zera the Great." Although the whole family participated in his father's traveling show, Lawrence, Jr. was encouraged by his father to get out of show business and pursue a career in art. When his father died, Larry went to school in Savannah, Georgia, to try and fulfill his father's wishes and then moved to New York City to work for the New York Sun and the New York Morning Telegraph as a cartoonist and graphic artist. He continued to do vaudeville acts on the side, however, and was offered a contract with Vitagraph Studios in 1915. There, he worked as a writer, director and producer and occasionally included himself in bit parts. When the “star” (Hughie Mack) left, Semon stepped in to play the lead roles, almost always in short (one-reel), slaptick comedies. Semon worked with many other well-known comedians of the era, including Stan Laurel and Oliver Hardy. 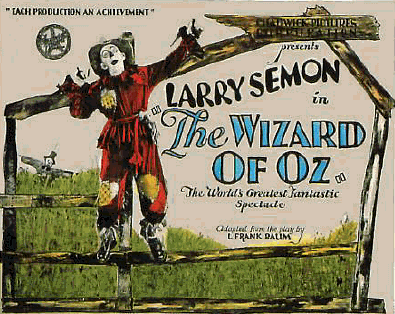 As Semon’s reputation grew, so did the complexity and length of his films, and he was known for staging elaborate (and expensive) gags with special effects. He apparently loved chase scenes, with “airplanes…exploding barns, falling water towers, auto wrecks and/or explosions, and liberal use of substances in which to douse people.” With production expenses increasing with each film, Vitagraph demanded that he become his own producer and underwrite his own films. Among the films he produced was the silent film version of “The Wizard of Oz” (1925), in which Semon played the Scarecrow. Appearing as Dorothy in the film was Semon’s second wife, Dorothy Dwan (born Dorothy Illgenfritz in Sedalia, Missouri), who starred in a number of pictures as Semon’s leading lady. Oliver Hardy was cast as the Tin Man. Apparently, the film is pretty strange. One recent reviewer said that watching it could "make your brain melt and ooze out your ears." Whatever the quality of the film (or lack thereof), it is now available to new audiences on re-released DVD versions of the "The Wizard of Oz."

Unfortunately, he couldn’t match the financial backing of a studio and declared bankruptcy in 1928 after producing and starring in a couple of feature films. Returning to vaudeville to try and make a living, Semon suffered a nervous breakdown and returned to Los Angeles, where he was sent to a sanatorium at Gracelon Ranch in Victorville, California. Dwan was acting in a theater at the time of Semon's breakdown and rushed to his bedside when informed that his condition was worsening. Lawrence “Larry” Semon died on October 8, 1928, at age 39 from pneumonia and tuberculosis. According to one site devoted to silent films, however, there are some who think that his death was faked to avoid creditors, as his wife Dorothy never got to see his body after he died (he was cremated) and due to the fact that, at his request, only a few people were present for the memorial service.

Because of his role in the development of the film industry, Larry Semon has a star on the north side of Hollywood Boulevard in Los Angeles. From 1915 to 1928, Semon produced, directed or starred in approximately 110 silent films.
Posted by Jim Woodrick at 7:30 AM