Pet Rocks were a 1970s fad conceived by Gary Dahl, a California advertising executive. In April 1975, while he was in a bar listening to his friends complain about their pets, Dahl had an idea for the perfect pet - a rock. Initially just a joke, he eventually wrote a 32-page instruction manual for a pet rock full of puns and plays on words and commands to teach the pet rock to "sit," "stay" and so on. Pet Rocks were usually ordinary rocks from a builder's supply store and came with custom cardboard boxes with straw and breathing holes. The fad lasted only six months or so, but during that time Dahl sold 1,500,000 pet rocks and became a millionaire. I was one of the 1.5 million. How about you? 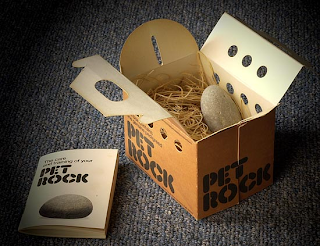