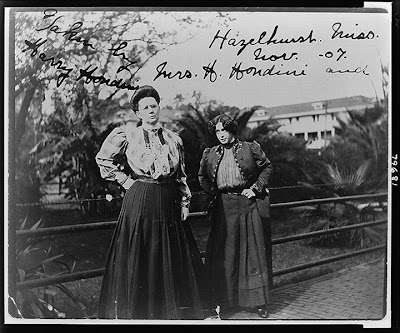 This photo is of Wilhelmina Beatrice Rahner, who was born in Brooklyn in 1876 and the daughter of German immigrants. She is better known as Bess Houdini, the wife of escape artist, magician and popular vaudevillian Harry Houdini (whose real name was Erik Weisz, born in Budapest, Hungary, and the son of a Rabbi). Bess and Houdini met at Coney Island and married in 1894, over the objections of her family because Houdini was Jewish. Bess and Harry toured for years in the United States and Europe as the Houdinis, and Bess was his stage assistant. The photo here was taken in Hazlehurst, Mississippi, on November 7, 1914. I do not know if the Houdinis performed there or were just traveling through, but they were certainly performing in the region at the time. Bess Houdini is the person on the right, and Harry Houdini took the photograph. Harry Houdini died on October 31, 1926, and Bess moved back to New York, and then to Hollywood, California, where she promoted Houdini's memory along with her manager and partner, Edward Saint. This photo is from his collection. On Halloween night in 1936, they conducted a seance the roof of the Knickerbocker Hotel in Hollywood. After failing yet again to contact her late husband (as he promised he would do), she ended the attempt and said "ten years [was] long enough to wait for any man." Previously, she had offered $10,000 to anyone who could produce a legitimate message from her husband from beyond the grave. No one ever claimed the reward. Bess Houdini died at age 67 on February 11, 1943, in Needles, California, aboard a train bound for New York City. Because she was raised as a Roman Catholic, her family would not allow her to be buried with her husband in the Machpelah Cemetery in Queens, and is instead buried at Gate of Heaven Cemetery in Hawthorne, New York.