A very rainy day in Jackson 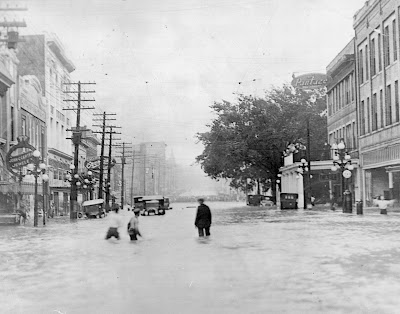 After experiencing heavy rain in the area today, I thought I would share a photo from April 16, 1921. This image of a flooded Town Creek was taken in the middle of Capitol Street in downtown Jackson, looking east. The area in this photo is in the vicinity of Farish Street. On the left is the very distinctive sign (in the shape of a diamond ring) for Carter Jewelers. Established in 1849 as the Carl J. von Seutter Jewelry and Art Emporium, the business was located in the Majestic Arcade Building. The store was purchased in 1918 by John C. Carter, one of von Seutter's employees. After Carter died in 1946, the new owner, Lee Letwinger, moved the business to its present location on High Street. Carter Jewelers is now owned by Jerry Lake. On the right of the photo is the Pantaze Cafe, whose motto was "Jackson's Pride - Best in the City." Although I do not know much about the Pantaze Cafe, it is interesting to note that there was also a Pantaze drugstore on Beale Street in Memphis during the same time period. As that is an unusual name, there may be a family connection. The Pantaze Cafe was apparently popular with the college crowd, as the establishment regularly advertised in the Millsaps Bobashela in the 1920s (as did Carter's).