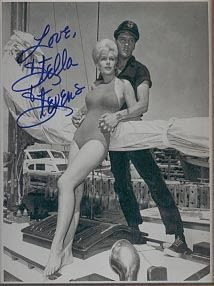 This is of actress, producer, director and pin-up girl Estelle Caro Eggleston (aka Stella Stevens), who was born in Yazoo City in 1938. Stevens began her acting career in 1959 and starred in such films as The Nutty Professor (with Jerry Lewis), The Silencers (with Dean Martin) and The Poseidon Adventure. Her first role was in the musical Li'l Abner in 1959. By that time, she had already been married, had a son, and been divorced. In 1960, she shared a Golden Globe Award for "Most Promising Newcomer - Female," with Tuesday Weld, Angie Dickinson and Janet Munro. The same year, she was January's Playmate of the Month. In 1962, Stevens starred alongside another Mississippi-born actor (some guy named Elvis Presley) in Girls! Girls! Girls! Shown here with Elvis, the two apparently didn't like each other much and she thought so little of the film that she has never watched it. In her career, Stevens has also appeared in numerous television shows, including Bonanza and General Hospital and has produced and directed two films, The Ranch (1989) and The American Heroine (1979). Her most recent TV appearance was in 2006.