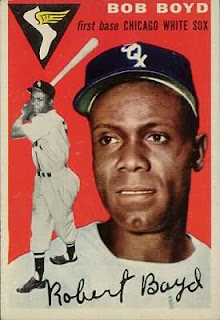 Robert Richard "Bob" Boyd was born on October 1, 1919, in Potts Camp, Mississippi. Potts Camp is located in Marshall County, and Boyd attended high school in nearby New Albany. Nicknamed "Rope," Boyd played first base in both the Negro Leagues and in Major League Baseball. In the Negro Leagues, Boyd played with the Memphis Red Sox (1947–49). In the Majors, he played for the Chicago White Sox, Baltimore Orioles, Kansas City Athletics, and Milwaukee Braves, all in the 1950s and early 1960s. Known for his line-drive hitting (thus the nickname), Bob Boyd was not a power hitter but was able to regularly bat .300+. He was a lefty, both in the field and at bat.
In 1950, at age 30, he made the big leagues and became the first black player on the Chicago White Sox roster. Although he was on the roster, he played only as a back-up and was traded to St. Louis in 1954, where he never actually played. Sent back down to the minors by the Cardinals, Boyd played for the Houston Buffs, the Cardinals farm club in Texas. In Houston, Boyd is remembered as that city's Jackie Robinson. In his first game in a segregated Buff Stadium (black fans sat in a separate section), Boyd hit a triple in his first at-bat in the second inning. "Even those whites who had been sitting on their wary haunches prior to the game," one writer remembered "rose to cheer for Bob Boyd and his first contributions to a Buffs victory, and, whether they realized it or not, to cheer for another hole in the overt face of segregation in Houston."* Based on his play in Houston, he was picked up by the Orioles at the end of the 1955 season. During the next season, he hit .311 and played in seventy games. Boyd finally made his mark in MLB history during the 1957 season. One of only eight batters to hit .300 in the American League that season, he finished fourth in batting behind Ted Williams, Mickey Mantle, and Gene Woodling. Boyd also became the first Oriole starter in the 20th century to hit over .300 in batting average. The next year, he batted .309 and hit a career-best seven home runs.

In 1961, Bob Boyd ended his major league career, compiling a .293 batting average, hitting nineteen home runs and adding 175 RBIs in 693 games. As a first baseman, he committed only 36 errors out of 4,159 plays. He also finished with a .300 batting average during an early stint in Latin America with Ponce in Puerto Rico (1951-1952) and Cienfuegos in Cuba (1954-1955). After the majors, he played for a number of minor league teams in Louisville, Oklahoma City and in the Texas League. He finally hung up his cleats for good in 1964. Bob Boyd died in 2004 at age 84 in Wichita, Kansas, where he retired as a bus driver with the Wichita WTA. He and his wife had one daughter. Boyd is a member of the Negro League Hall of Fame and of the National Baseball Congress Hall of Fame.